The Subtlety of Setting (by Patty Blount)

Settings are my weakness.

I hate admitting that. I once had an editor ask, "Where is this conversation taking place?" in one of my novels because the last clue to where or when in the story readers were had been given an entire chapter earlier.

I have a friend who writes contemporary romance with such amazing attention to settings, I feel like I could reach out and touch, smell, and taste them. (Jennifer Gracen -- go check out her work!)

There is an art to bringing settings to life so that they don't read like long boring lists of description. I make it a point to improve my settings work in every project and I do see some improvement but it is still something I must pay close and careful attention to.

One tip I followed came from Stephen King's ON WRITING. In the chapter in which he proclaims that writing is telepathy, he uses a thought exercise involving a rabbit in a cage on a table with a number painted on its back. King explains that some readers will imagine the cages as small, others as larger pens. Some will have lace edges on their table cloths while others won't. The point is readers can supply enough of the detail they need to paint a mental picture. Authors don't need to provide the specs on each piece of scenery.

What I learned from this exercise is that some details simply don't matter to the story you're telling. Use only the ones that do.

In my first novel, SEND, main character Dan makes it a point to describe the kitchen of his family's new house. What color it is, how big it is, how it smells.

Do these details matter in a YA novel? For the character of Dan, they were essential.

Dan spent time in juvenile detention. The house he's describing is not the one in which he was raised. His careful attention to these details is a way of reassuring himself that he's 'home' -- though this is a different house, it has his Mom, his Dad, his grandfather, his favorite foods, therefore, it is...no... HE is home.

I ended up writing a scene I was quite proud of.

There's another tip I follow but I can't give credit where it's due because I just don't remember where I learned this. It's to write setting in an unusual manner, using the basis of the game "Taboo" to describe the scene. In "Taboo," players must guess words on a card while their team-mates describe the word without using any of the taboo words also printed on the card. For example, for the word ACCIDENT, the Taboo words might be CAR, CRASH, WRECK.

The author used an example of a room -- an institutional room made of painted cinderblocks. Boring and antiseptic. The directions were to describe that room without using its obvious characteristics, meaning the cinderblocks were now off-limits. The author wrote,  "It was a room no one ever fell in love in."

I immediately felt the chill, the total absence of joy in that sentence. It made a huge impact on me and though I don't remember who taught me this lesson, I have never forgotten it.

So I now try to find some unique aspect of my settings to explore through the eyes of my characters. I'm working on an adult romantic suspense and the primary setting is an old Victorian house, like this one. 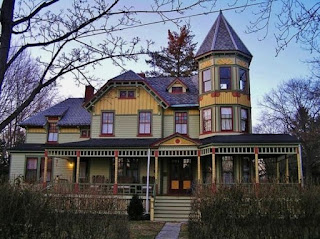 I sprinkled in the aesthetic and architectural details like color, size, number of floors throughout the story but I also wanted this setting to convey certain moods. For Angela, the home's new owner, it was home and haven. For her grandmother, it was nightmare and prison. For Roen, a contractor, it was opportunity and challenge.

Throughout the story, I changed descriptions to show whose POV I was in as well as to reveal conflict. In flashbacks to Angela's grandmother, I describe the house's chill and mechanical problems, and spots she avoided, but when Angela's on page, I use terms of her treasured childhood memories.
Angela and Roen share a desire to preserve the house's history. But Roen wants to update it with modern conveniences and open floor plans. For Angela, that's way too much change...until she discovers the horror her grandmother endured. Preservation takes on a different meaning and Angela shifts closer and closer to Roen's intentions to renovate the space in ways that cleanse the house of its past, which speaks directly to Roen's need for challenge while still honoring Angela's need for home.

Here's one to show Angela's grief.

ECHOES OF THE LIFE AND the love that used to fill the old tower house taunted Angela.
Or maybe the right word was haunted.
She pressed a hand to her mouth when the grief hit again… a sharp lance straight through her shattered heart. Gusts of wind rustled through the still-bare trees on the property that had once been her favorite place on earth. Now, it only reminded her of all that she’d lost. Gran wouldn’t be waiting on the porch for her, gray hair flying in the breeze, arms open and ready to wrap her up in a warm hug.

The tower house stood tall and lonely against a deep purple sky when she rounded the curves of her driveway. The construction mess still made her twitch but she was coping well, under the circumstances, if she did say so herself. Maybe it was because she had a bigger puzzle, a bigger mess to organize.


The end of renovations:

She lifted her head and looked at the house, really looked at it.
And then she ran, ran with the same excitement and anticipation she’d felt when she was a little girl, coming here to stay with Gran for a week or a summer. She ran to the front of the house and up the new stone steps to a renewed porch that didn’t sag or squeak.


It doesn't matter that the house is gray or beige, or if the tower is on the right or the left side. Those details are added where and when they do matter. But what matters in these scenes is the mood, the emotion, the connection to place and time.

Tell me about stories where the settings were so real to you, you wished you could visit?