Advice to the Parents of Teenaged Dogs (Alissa Grosso)

This month we're giving some advice to the parents of teenagers. Since I don't have any (human) children of my own, I don't feel at all qualified to give advice to to parents of teens. That said, I am the parent of a dog who celebrated his fifteenth birthday three months ago. So I do know a thing or two about cohabitating with a senior dog.

I've had Jack since he was an eight-month-old free-to-a-good-home dog. Who gets rid of an eight-month-old puppy? Well, there were some extenuating circumstances with his previous family, but I think one of those extenuating circumstances was Jack himself. Because at eight months old he was energy on top of energy on top of energy.

I know this is supposed to be advice for parents of senior dogs, but if you are at the point in your life where you're considering adopting a puppy and are trying to decide between breeds, let me just say you want to think long and hard about whether a shepherd type of dog is really the right fit for you because their energy level is off the charts. I would also advise you to early on give them jobs to do, because if you don't they will make up their own, and that might not sit well with every member of your household. Jack early on decided he was going to be the best cat herder ever. You can probably figure out how well that went. I should say that even at 15, in a household that no longer has any cats, Jack still considers himself a champion cat herder much to the consternation of any neighbor cats that happen to cross his way.


By the way, the people who I acquired Jack from described him as a lab mix. I think this must have been just some ploy to get him adopted because they knew how lovable and popular Labradors are. I have seen the way labs eat, and can say with confidence that I believe Jack is about zero percent lab. I've never done one of those doggy DNA tests, but I'm guessing he's part border collie or part Australian shepherd or maybe some of both. He basically is a border collie shaped dog with the coloring of a brindle boxer but with long hair so that he looks like an Aussie. During the time when I was living in an affluent New Jersey suburb people would stop me all the time to ask about what exotic breed he was, the whole concept of mutts being a bit over their heads.

Entering his teen years has brought some changes to his personality. I can't say that I'm disappointed that my dog now sleeps a lot more than he used to. Because, honestly, when you have a dog who is seemingly made out of pure energy it can be a bit exhausting. He still counts playing as his number one priority in life. I know 15 is old for a dog, and I know at some point it will be time to say goodbye. For Jack, I figure that will be the day that he no longer has interest in playing.


For now, though, he still makes sure to spend a majority of his waking hours playing, this despite a body that has begun to betray him. He can no longer hear at most registers, though there's evidence that squeaky balls can still be heard by my old dog's ears. He back legs have become especially unreliable, but even with wavering back legs he is happy to stand there on the living room floor tossing a dog bed (one that he only uses for storing toys and not for sleeping in, a rule he invented for himself) around.

Besides these physical changes I've noticed in my teenager dog, I've noticed some mental changes as well. Jack has always been prone to stress and anxiety, but there were certain things that absolutely terrified him and things that didn't phase him at all. The veterinarian (it doesn't matter which one as we've had a few over the years) is the most absolutely terrifying, awful experience ever in his opinion. My normally sweet dog turns into a teeth-baring Kujo during vet visits. On a more general level just the idea of strangers touching him is pretty frightening. Thunderstorms never used to phase him, but as he has entered his teen years he has decided they are cause for serious alarm, and I have the dog pee stains on my mattress to prove it.

I can't really give too much advice about food, because my dog has always been a weirdo when it comes to eating. Let's just say he'll eat when he's good and ready to eat and not a minute sooner. I don't know if it's because the cats we had when he was younger trained him to eat food a little bit at a time or if this is something to do with all his stress and anxiety,  but eating has never been something he was especially good at. That said, the senior years have brought some changes to the food he eats. A few years ago I noticed, without going into too much graphic detail, that on dog walks Jack seemed to be maybe not getting the full nutritional value from his food and so to combat that digestive distress switched him to a senior variety of kibble. This worked for awhile, but eventually he was making too much of a stink about eating that and I tried switching him to a slightly softer kibble. I can assure you Purina is not paying me to say this, but if you're looking for a softer, tender kibble Purina's Beneful Simple Goodness dog food is a wonderful solution. These days, though Jack actually get a big can of soft senior dog  food in the morning and his soft Beneful kibble in the evening.

If you're wondering, I switched to the softer foods because I thought his old teeth might be the reason he was getting even more fussy about his dry kibble, and that may be true because I do notice the slowness and reluctance with which he seems to eat dry, hard dog biscuits, but that said he will still happily chew away on a bone so maybe he's just playing me. I wouldn't put it past him.

Though our walks have grown slower and shorter, and his old man dog farts can stink up the entire house, life's still good with my senior dog. But he's telling me I need to get up from this computer and take him out to pee because as he's entered his senior years pee breaks have become more and more frequent. So on that note I'm going to leash up my old dog so that he can go water the grass and keep the neighbor's cats in line. 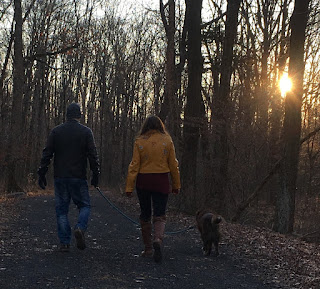 When she isn't taking her dog on endless pee-pee walks or throwing squeaky balls, Alissa Grosso writes books, including some for teenaged humans. You can find out more about her and her books at alissagrosso.com.
Posted by Alissa Grosso at 7:16 AM