Writing — Or Not — in the Time of COVID (Mary Strand)

This month our YA Outside the Lines group first discussed blogging about HOW to write in these seemingly never-ending days of COVID-19 ... but then someone mentioned that she HADN’T been able to write, period, and wondered if anyone had any advice.

Others, similarly afflicted, chimed in.

A few weeks ago, someone asked me what I’m writing these days, then didn’t/couldn’t/wouldn’t believe me when I said I can’t write right now. Like, at all.

“Of course you can. Why not?” I explained that I’m supposed to be working on revisions, and revisions (unlike first drafts, which I could probably write while half asleep or drunk, although I’ve never tried it) require pristine working conditions: dead silence, 100% intense focus for extended periods, and basically having it all together.

My incredulous interrogator (also known as “the muggle”) then said, “Okay, so just write a first draft of something new.”

Suuuuuure. When the revisions I need to do are to book 1 of a planned six-book series, and I need to then revise books 2 and 3 (UGH!), and I was halfway done with the first draft of book 4 when the editor’s comments on book 1 arrived, but — tra la la — I should just drop the whole thing and write something new.

About what? Believe me: my well is as dry as the Sahara dust cloud blowing our way. 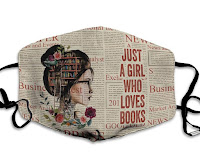 The songs I’ve written in the last few months — because I CAN still write songs these days, thank God — have already brought to the surface an extremely dark side to my humor, and I’m not known for dark humor. At least, not publicly. Plus, I no longer have live music (listening to it OR playing it, except alone) to inspire and soothe me. Plus, I can’t bear to read anything right now unless I’ve already read it or unless the (happy) ending is a sure thing. Plus, I can’t travel anywhere, so there goes both inspiration and the calm that comes from physically escaping from the here and now.

Writing isn’t like churning out widgets on an assembly line. People who don’t live a creative life (muggles, muggles, muggles) often don’t understand that. Yes, some writers can write during a pandemic, or hurricane, or the death of someone close to them. I’ve been on both sides of that coin: when my brother Patrick died in January 2007, I stopped writing altogether for four months. Four months after his death, my sister Sheila died (yeah, not a good year) ... and I started writing again the next day. Totally illogical, and I was a logic tutor in college.

All I can do right now is hope that it does.

By the way, WEAR A MASK. Think of it like a seatbelt — no biggie, right? — and do it for yourself and everyone you care about. As my daughter (and my YA characters) might say, it’s not that deep.