While there is nothing quite like typing THE END, I still have to say beginnings. Yep, definitely beginnings. The first few lines, in particular, are so much fun. They’re a challenge, of course. How to invoke voice, time, and place? More importantly, how to entice the reader into page two, three, four, and more?

The modern trend is to start with action. Throw the reader into the passenger seat of something gaining both speed and altitude.

The goal, then, is clear. It’s the execution that becomes tricky—and the delicious challenge.

One of the writer tricks I use is to write those first few chapters knowing and assuming they’re expendable. The initial scenes are often the get-to-know-you period between the writer and the characters. Important background information is conveyed but may have to be teased out and reworked into subsequent pages.

It’s also important to be aware of your inciting incident, the event following which your main character is presented with a conflict or a problem. This may not be your opening scene, but whatever action you begin with must be relevant and a setup to this jumping-off point.

An example: In my most recent release, The McCloud Home for Wayward Girls (an adult contemporary, Berkley Books, August 2011), an early draft opened with the main character, Jill, collecting her elderly and addled mother from the police station. While that initial scene offered shock value, colorful dialogue, and character setup, it lacked direction and relevance. The inciting incident of the novel is a funeral that brings to town key players from Jill’s past and eventually unearths a long held secret. The final draft, therefore, opens with the news of the death:


“Jesus! Jasper. Are you trying to scare me to death?” Jill said, steadying herself against the creaky door of the antique armoire. Jasper Cloris, the local undertaker, loomed in front of her. His pallid demeanor had always given her the creeps, as if he took his work home with him.

“Hope not. Business is fine. No need to recruit.” 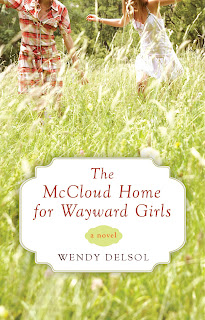 I’m sure many of my Outside-the-Lines colleagues will go with endings as their preference. Nothing like achieving a goal. And goes without saying that middles weren’t even offered up as a choice. The post-honeymoon, no-end-in-sight climb. Now there’s where you hope craft will keep that passenger from bailing.