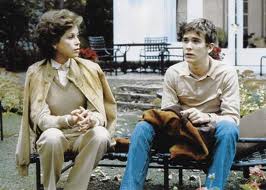 Ordinary People by Judith Guest (1976) is one book that I think of when I contemplate the role of parents in YA. This brilliant novel was not originally marketed as YA, although I think if it were to come out today it would be. And it’s probably best known for the excellent film adaptation that came out in 1980, directed by Robert Redford and filmed not far from where I grew up and went to college at Northwestern in Chicago’s affluent northern suburbs.

The novel is the story of the Jarrett family, wealthy—perfect, wanting for nothing—whose world and lives are fractured by the death of their oldest son Buck in a boating accident. The younger son, Conrad – not as popular, not as athletic, not the golden boy—survived and his resulting guilt has caused a spiraling depression and a suicide attempt, all before the book opens. Ordinary People is Conrad’s story mostly – of his fall and his redemption and healing, his ultimate understanding that it was okay to be stronger than his brother and that people do the best they can.

But when I think of this novel, it’s also the parents that I think of, particularly Beth Jarrett the mother (played with ice cold brilliance by Mary Tyler Moore in the film) who ultimately cannot exist in the imperfect world created by her older son’s death. It’s not that she doesn’t love Conrad. It’s that she can’t love him enough, can’t get beyond either the Buck’s death or Conrad’s survival. She cannot – for reasons both nature and nurture—live with a damage, imperfect family, a younger son who sees a psychiatrist, who was hospitalized after his suicide attempt. Like a cracked plate (and the film has a great scene with exactly that) that can’t be glued together, Beth’s own sharp-edged pieces cannot be mended. She cannot be the mother than Conrad needs. It is both her failure and the family dynamic of perfection that in large part informs Conrad’s personality. It is a tragedy writ both large and small, that one change unearths these weaknesses and nothing can ever be the same.

As a writer, I tend toward stories of flawed, imperfect characters with equally flawed, imperfect families. My mc’s do not exist in a void. Even though they are the main focus, their parents’ roles and own stories inform how my mc’s behave, how they feel about themselves, what they want. Other things do this as well: school, society, peers. But even when relegated to the background or largely non-present in the story, the people who raised my characters do have an impact. And I think it’s the case in so many books and movies and tv shows that I enjoy. What the parents did or didn’t do; what they see or choose not to see – it’s all pretty crucial.