“When I have a little money, I buy books; and if I have any left, I buy food and clothes.” -Erasmus/ Brian Katcher 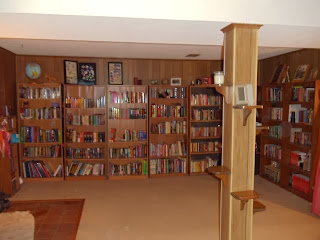 They've taken over the basement. Now they want the house.

On my last date before I met my wife, I asked the woman what her favorite book was. She told me it was Rainbow Fish. When I clarified I didn't mean as a child, she stuck with her current choice.

It knew right then it was not to be.

On my first date with Sandra, the woman who became my wife, I asked her the same question. She couldn't answer. Not because she doesn't read, but she really couldn't narrow the choices down to just one.

As you could tell from the picture above, bibliophiles should not marry. Now that we have a daughter, it's just getting worse, with her books becoming a force of their own.

We all have e-readers, and yet the physical books still continue to expand like some sort of sentient thing. When our basement flooded last spring, we used the opportunity to get rid of a lot of books we no longer read. Must have given away two hundred volumes.

The space is already almost gone.

When we travel, we have to pack an extra bag just for the books. Sandra hides a spare novel in the car, just in case she gets stranded somewhere.

All three of us have been busted by teachers for reading in class too much. My biggest culture shock when I lived in Mexico was the lack of English books. I was so desperate, I read Ethan Frome.

My daughter, Sophie, once had a breakdown when we just stopped at the library to return books at the drop box. It's the one time we succumbed to a tantrum.

We're like those people with hundreds of cats, only without the stink. When Sophie goes off to college, my sadness will be slightly tempered by knowing we can set up bookshelves in her room.

It's an addiction.
Posted by Brian Katcher at 12:00 AM