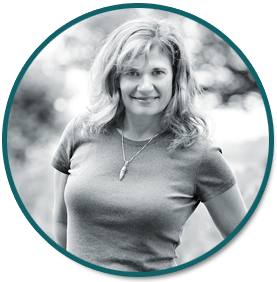 So every comic book villain has a backstory. What's yours? Did you always want to be a writer, or are you just a retired CIA assassin like most other YA authors?

My backstory is even worse—I was a people pleaser. *gasp* Yes, one of those. My code name was Kimmiepoppins. And I was “practically perfect in every way.” It was terrifying. At the drop of a hat I could morph into almost any shape or form that made other people comfortable. I’d put them at ease and then with my powers of perception, I’d study their quirky lives and personality traits. Then I’d use that info to make them happy. But I realized along the way that I was loaded with interesting facts and tidbits that might change the course of the world if I could bring them to the light of day. Only, the one thing I didn’t have was a voice. That’s when I decided to change from a life of people-pleasing crime to the much scarier life of a YA writer. And like any good writer, I’ve held on to the best parts of Kimmiepoppins (she has some mad skills that come in really useful) but I’ve also learned that I’m a whole bunch of things, especially now that I have a voice. And in case you’re wondering, my secret rapper name is K-pop.

Your book, TOUCHING THE SURFACE, has this evocative blurb: "When Elliot finds herself dead for the third time..." 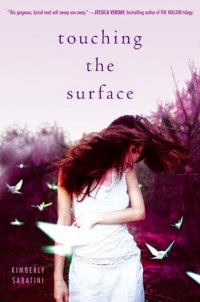 Tell us about this interesting-sounding book.


When Elliot finds herself dead for the third time, she knows she must have messed up, big-time. She doesn’t remember how she landed in the afterlife again, but she knows this is her last chance to get things right.
Elliot just wants to move on, but first she will be forced to face her past and delve into the painful memories she’d rather keep buried. Memories of people she’s hurt, people she’s betrayed…and people she’s killed.
As she pieces together the secrets and mistakes of her past, Elliot must find a way to earn the forgiveness of the person she’s hurt most, and reveal the truth about herself to the two boys she loves…even if it means losing them both forever.
The unofficial blurb is that my father died almost ten years ago and I needed to write about all the things I was thinking and feeling. This was a safe place for me to explore the questions and the hurts I had. In fact, it was so safe, I didn’t realize that’s what I’d done until the book was finished. I always tell people that my Dad lives in the spaces between the words of TOUCHING THE SURFACE.
According to your FAQ, you've traveled extensively. Do you find that seeing other parts of the world helps you as an author?

Seeing other parts of the world helped me as a person and that can’t help but make you a better writer. The lens I used to view life was so narrow before I had the chance to experience other people and ways of life. It opened my eyes. Traveling also helped me because I’ve always taken quite a stand against change. I’ve never been super comfortable with the C word. To move to Germany shortly after getting married at the age of 23 took a huge amount of bravery on my part. For some people this wouldn’t rock their boats at all. For me it was an act of courage. I didn’t come home or see my family for a year. And back then, in the “good old days,” the internet wasn’t what it is today. No one Skyped. No one texted. We didn’t have a computer or cell phones. We wrote letters and could only afford to talk to our family on the phone for a half hour on Sundays. It was one of the best experiences of my life.

I find that I get easily distracted when writing. I mean, how am I supposed to make my deadline when the Wikipedia entry for 'Ernest Goes to Jail' is so poorly written? As a mother of three, how do you find the time and energy to sit down and write?

It’s all about underwear avoidance. If I’m writing, I have a legitimate excuse to not wash the underwear of the four males in my home. My hubby tells everyone that we have the largest supply of underwear on the planet. *grin* The writing thing is also helpful when circumventing cooking, cleaning and all activities involving the PTA. That’s the very true and funny answer. But there’s also the very true but deeper answer. I find time to write because I know what it feels like to have no voice and I never want to be swallowed up completely by other people again. And I believe by allowing my kids to see me work and struggle and grow with something meaningful, they too will learn what it means to define yourself uniquely in this world. I’ll never forget what my husband said when TOUCHING THE SURFACE launched. “How cool is it that our kids watched you have a dream, saw you work so hard for it and then got to see it come true?” That’s what makes me sit down and write.

So what are you working on now?

I’m working on a YA novel that has been like a lump of clay kept in the freezer. I am in love with this book, but I’m constantly having to kneed it and squish it to make it pliable. It’s truly been a pain in the ass LOL! It feels as if I’ve written an encyclopedia Brittanica between all the drafts and false starts. But It’s coming and I believe it will be worth the wait.

Freebie: Anything else you'd like to tell us? Anything...disturbing?

I’ve got an epic ton of stuff that other people often find disturbing about me. Here’s a small sample... I only wear make-up twice a year for my annual dance recital. Can’t stand the stuff. When I moved into my current house last year, my mother-in-law almost wept when I told her I was making the adorable, built-in make-up table into a bonus desk. LOL! I also can’t wear heels without tipping over, dresses make me crazy and my uniform of choice is jeans, a long sleeve T-shirt and a polar tech vest with sneakers. I would die happy if I could wear that to weddings. Additionally I have chocolate issues and have been known to resort to swigging Hershey’s syrup out of the bottle in emergencies. I really like to run (you have to run if you like chocolate that much) and in the last two months I have been running about 75 miles each month, which is a huge improvement over my previous years of running. And the HUGE increase in milage is because I’ve realized that I love to run to audiobooks!!!! If I’m listening to a good story, I’ll keep running so I can hear more. And then I come home and guzzle chocolate syrup. Nobody’s perfect.