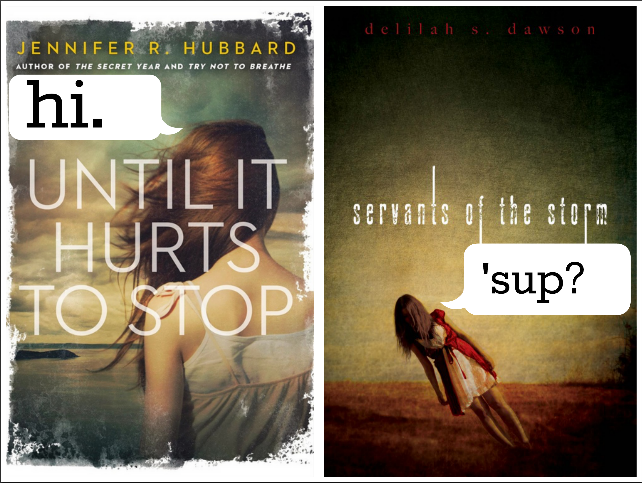 Okay. Not really. But it *could*, I guess, if you're scared of demons and credit card debt.

This is Delilah, and thanks to my recently broken back and some meds that don't entirely lend themselves to linear thought, Jenn and I are posting our own interviews, so you can see her answers to my questions on the 27th.

And here are my answers to her questions. Confused yet? Me, too!

Jennifer Hubbard: I see that your 2015 book, HIT, is described as "pre-dystopian." What is pre-dystopian and why does it fit this book?

Delilah S. Dawson: Pre-dystopian is a (half-joking) term I came up with the describe what seemed to be the first step between the America we know and a skewed dystopia like what you see in The Hunger Games or Divergent. That's something I haven't seen addressed before--at what point did the timeline head towards strange futures that we can't quite grasp? Because Effie Trinket doesn't happen in a vacuum. In this case, the instigating factor is a bank buying up all of America's debts and taking silent control of the police force and other supporting elements of the government. It's pretty chilling to me, thinking about what would happen if you were having an emergency, called 9-1-1, and got a bank's voicemail.

When publishing says "Dystopian is dead," I basically had to find a new way to describe what happens right before Dystopian. :)

JH: You write edgy and dark stories, and you've blogged that it's because you've learned the difference between "safe"--i.e., fictional--horror, and real danger. How does true-life danger inform your writing? How do stories help us cope with fear?

DSD: I never felt safe as a teen, so there was a certain dark thrill in reading horror that could never happen to me. Somehow, Stephen King and Thomas Harris crafted stories that made my reality feel safe and comfortable. If I sought fear on purpose, then it made me feel stronger, more in control. Better the nightmares that you've chosen than the ones you can't avoid.

So many places and events in Servants of the Storm are real--like the way that I felt sitting in an old theater in Savannah, a chill up my spine, as if a gun was pointed at my back. Or the feeling of walking down a dark alley, knowing that I was being followed. The physical sensations are unpleasant but inform the writing, and the memories never really go away. Sometimes I worry that almost every story I write includes a rape attempt or some sort of sexual harassment, but... all of it mirrors my own experiences. It would feel disingenuous to write a story from the perspective of a teen girl who *didn't* have to deal with unwanted advances.

JH: You also write for adults. What's special about YA to you? What are the best things about writing YA?

DSD: I just really hate the boring parts of being adult. Taxes, bills, neighbors, credit card theft, grandparents in the hospital, broken microwaves. Writing YA lets me drop all the responsibilities and focus on adventure, on fighting for what's right, on feeling the tummy flip of new love or the small hairs rising on my arms in the darkness. Once you're an adult with a spouse and kids (like me), so much of your life is taking care of other peoples' needs and making decisions based on what's best for the people around you. But when I write YA, the story focuses in on the main character, and their motivation, feelings, and decisions drive the story with pulse-pounding action that I just don't get in my everyday life.

JH: What's your favorite scene from your 2014 book, SERVANTS OF THE STORM, and (if you can tell us without being too spoilery), why do you love that scene?

DSD: My favorite scene has always been the one in the abandoned amusement park. The entire book was inspired by a photoset of Six Flags New Orleans after Katrina, so I knew that something really dark and creepy was going to happen there. I love the darkness, the fear, the mystery, the decay, the demons lurking in every shadow.

When I was 10 or so, I became convinced that amusement parks and, yeah, even Disneyworld, were all out to murder kids. That every 20th cart or so got dumped out into a giant vat of rotting corpses, and no one every really questioned it. I didn't understand things like statistics or insurance or attorneys, so it just made sense. It was a joy to bring that kind of paranoia to life.

Thanks for the great questions, Jenn! If anyone else ever has questions for me, whether about riding or writing, feel free to ask in the comments or @ me on Twitter, where I'm @DelilahSDawson. Check back in on November 27th to see Jenn's answers to my questions.