Shortly after selling my young adult novel, Famous Last Words, I received my first editorial letter. It was three or four pages, single-spaced, and in addition to a long list of other changes, my editor wanted me to add a mystery subplot to the existing storyline. What? The mere thought of how and where to begin paralyzed me.
Thankfully, my author friend, Sharon Biggs Waller, told me to read Martha Alderson’s book, Blockbuster Plots Pure & Simple (Illusion Press 2004). It was exactly what I needed. Martha a/k/a The Plot Whisperer, schooled me in the art of creating scene trackers and plot planners—visual tools that helped my right brain-way of thinking tremendously. More importantly, I learned that every scene should advance threes strands of the story: the character’s emotional development, the dramatic action, and the thematic significance of the story. Ever since then, I’ve had quotes from Martha’s first book hanging above my desk.


Plot springs from character in conflict.
Make your scenes work for you by incorporating a strand of each of the plotlines into every scene. (Those are the three mentioned above.)
Plot is a series of scenes that are deliberately arranged by cause and effect.
Here’s what my scene tracker for that novel looked like. 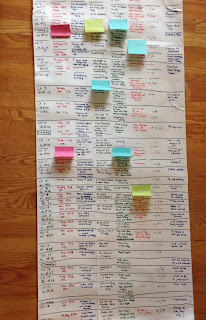 It’s about six-feet long so it was hard to photograph the entire thing. Every scene from the book is included with columns for dates/setting, character emotional development, goal, dramatic action, conflict, change, theme detail.
After years of relying on her sage whisperings to guide my writing, last summer I finally spoke with her on the phone and realized I had some catching up to do! Since her first book was published ten years ago, Martha has since published a series of Plot Whisperer books and companion workbooks through Adams Media.
In addition to her books, Martha also does workshops (in-person and online) and consultations by phone and Skype. I consulted with her while I was revising my latest YA novel The Summer After You & Me and it made a huge difference. She’s a busy lady, but she graciously agreed to be interviewed for my blog. We talked for a while and she shared her wonderful insights—insights I’d like to pass along to writers who, like me, struggle with plot. Here are some of the highlights of that interview that I’d like to share here at YAOTL.


What are some of the most common mistakes writers make when it comes to plot?
Writers make plot too hard. They tend to concentrate either on writing action or on developing characters, whichever is their strength, and forget to juggle all of the primary plot lines and secondary and sub-plots.


So many authors, both published and unpublished, actually fear plot. Why?
Generally I think because writers who are character driven, and know their character, and come at writing stories through character—right brain people—have a really hard time with goal setting for themselves and their character. But the goals really determine the dramatic action plot. How they’re going to get from point A to point B is going to reveal the character. You need to have this external action to see who this character is. We have to see the characters in action. That’s the “show don’t tell” rule. We get to see who the character is by what they do.


Can you take us through the process of working with you? I ask writers to send me a couple days before the plot consultation a brief character sketch and a one-liner that embodies the thematic significance or deeper meaning of their story, if they know it. They are to have a list of scenes ready when they call. If they've written an entire draft, a completed list. If the writer is preparing for a new story, then a list of potential scenes or events. During the plot consultation, we go over the key scenes and then either concentrate on a specific part of the story the writer is concerned about or we jump right in and begin plotting out the entire story based on the dramatic action, character emotional development and thematic significance, depending on the time and the size of the project.
When you work with authors, can you tell immediately whether or not their plot is working? Yes. I will ask for the key scenes. The energetic markers, the skeleton. The four markers need to be in place first. I’ve never worked with a story that can’t work. It’s a matter of getting the writer to understand what’s missing.


Note: Martha discusses the four energetic markers at length in The Plot Whisperer. They are: The End of the Beginning, The Halfway Point, The Crisis, and The Climax. I’m a right brain, pantser myself but I vowed that I will not begin my next project without having these markers in place.


How did your develop such a clear understanding of plot as well as extremely effective methods for tracking scenes and planning plotting? When I started writing, plot was impossible. It was so abstract. I couldn’t pin it down. I started to understand plot by deconstructing the plots of (well-known, classic and best-selling) novels, and I did start to see a form. I’m a very visual learner. I wanted to show the concepts, to break it down with the plot planner and the scene trackers.


The Plot Whisperer expands on these concepts, but goes deeper. You talk about the Universal Story and the importance of thematic development.
When the character is transformed over time because of the dramatic action of the story means something or it has thematic significance. When we grasp that deeper meaning and bring that through with all the word choices and details, we’re then helping the story to resonate with the reader for much longer. I want writers to work toward that, but if they don’t quite get all the way there, it’s okay. It’s about the effort. I want writers to not know that there’s more they could provide their readers.


It’s what takes a story to that next level?
It becomes a classic. The books that are studied in school and are passed down to generations. They resonates with us for longer. The Universal Story is a story form that’s been used throughout the ages. I see it everywhere. It’s the universal rhythm of life. If you can get that into your story and provide meaning, it’s harkens back to something that we’re not even aware of and we know that it means something to us. If we’re going to spend years writing novels, why don’t we aspire to that level?

I fear writing the middle of the story more than the beginning or end? Why is the middle so hard?
The thing that’s so hard about the middle is that main character enters the exotic world of the antagonists. She moves into a world that’s fraught with challenges because it’s being controlled by the antagonists. It’s the testing ground. We love our characters and some writers, especially YA and middle grade I’ve noticed, can’t bear to be mean or torture their characters. I ask writers to identify and use as many antagonists - whomever and whatever stands in the way of the protagonist moving forward toward her goal - as possible to create more tension and conflict in the middle. All the subplots, those reign in the middle too. There’s a lot of juggle, there’s a lot to keep in mind and the writer will be challenged more and more. The middle is more intense, we get to know the characters more deeply. The writer also goes deeper and deeper we have our own crises. The middle is where the writer and the character emerge either as victim or victor. 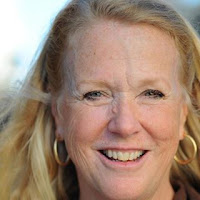 Martha Alderson, aka the Plot Whisperer, is an international plot consultant for writers. Her clients include best-selling authors, New York editors, and Hollywood movie directors. She is the author of the Plot Whisperer series of plot writing resources for authors: The Plot Whisperer Book of Writing Prompts: Easy Exercises to Get You Writing – the third installment in the Plot Whisperer Trilogy, including: The Plot Whisperer Workbook: Step-by-Step Exercises to Help You Create Compelling Stories, companion workbook to The Plot Whisperer: Secrets of Story Structure Any Writer Can Master (Adams Media, a division of F + W Media). She has also written Blockbuster Plots Pure & Simple (Illusion Press) and several ebooks on plot. Martha is the founder of International Plot Writing Month held every December and better known as PlotWriMo. She conducts plot workshops in-person, online, and through many organizations for writers.


Where to find Martha: