The Most Frightening Monster Movie Ever (Brian Katcher)

My mother likes to relate that one night, when I was about four years old, she found me crouched behind the living room couch, watching a horror movie, too scared to leave, too entertained to look away. In spite of my terror, I refused to let her turn it off. The movie? 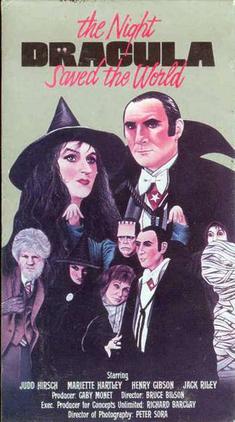 Originally titled 'The Halloween That Almost Wasn't', it dealt with a motley assortment of monsters trying to save Halloween in a world that no longer scared so easily. That's Judd Hirsch of 'Taxi' fame as Count Dracula.

The whole thing was slapstick. The film opens with Dracula startling Igor, who's watching TV and spills his bowl of popcorn. Frankenstein's monster tap dances. The mummy keeps running into things. The movie ends with a leisure suited Dracula disco dancing with the witch.

And yet to my young mind, a zany Dracula was just as frightening as any scary vampire. And I guess that's what makes Halloween great.

That, and it keeps Walmart from moving Christmas season into October.

I tried to watch this movie the next time it was on, but it was cancelled for some stupid Carter/Reagan debate.