The best advice I can give as a writer?

Know when push will come to shove. And when it does, stick to your guns.

I'm generally pretty relaxed about editing. If I vehemently disagree, I change it back, but generally I let things go. After all, a good editor won't change your voice or interfere with your message, and I am nowhere near OCD enough about my writing to give a damn about comma placement.
That said, I recently got into a row with a publisher because push came to shove.

I'm a 25-year-old British transman. Long before I even came out and started transitioning, everyone who knew me called me 'laddish.' When I visit my dad, I can usually be found in the local pub playing pool, and it's the kind of joint where cocaine is openly snorted off the tables and nobody is referred to by their name, but rather a variety of insults. When I broke my knee as a teenager, I was immediately dubbed 'oi, gimpy' by even the bar staff. (My dad, a regular of well over a decade, is known as Granddad for his love of granddad jumpers and his fluffy white beard.)

I grew up near that pub. I was bullied throughout school, and it stopped after I threatened to knife another kid in my English class when I was in my late teens. Suicides were pretty common in the area, and the weekend I moved away to go to university, a drug dealer round the corner from my dad was shot with a crossbow by a competitor. In front of his wife and kids. Who celebrated the fact.

And I'm at home there.

Sometimes, I'm even more comfortable there than I am in the LGBT fiction community.

The row with the publisher originated over language in YA. They were uncomfortable with teenagers using words like 'mental.' The word 'chavvy' was particularly problematic, although used only once, and the question 'do gay teenagers use gay as a term of abuse' was genuinely asked by one editor.
(Answer: yes. I lived with a gay Jew in university who once came home with a huge bag of new clothes because there'd been a sale in the city centre and said to me, "I don't know if I had a gay moment or a Jewish moment.")

Any and all prejudiced terms, I was told, would have to be either taken out, or called on by a third party to show the reader they weren't acceptable.  Not acceptable? I thought. Gee, thanks, practically nothing I ever said to any of my friends growing up would be okay, then.

I didn't know what to do. This was a major clash with my own ethics -- I focus my writing specifically on those seedier, rougher people and places precisely because they are left out of LGBT fiction far too much as it is, and it would be impossible to write a book featuring those people without such language -- and yet this publishing house were one of the biggest in the business. It was my ethics versus my career.

And someone who doesn't worry about his elderly and ill father, because the local cokeheads will pop round to check 'Granddad' is okay if he doesn't turn up for his 12 noon pint. Someone who doesn't respond to his own name, but 'oi, midget' will get his attention in a crowded room. Someone who can put his fist through the plaster and feel better instantly, when no amount of talking about it is going to help.

That's what diversity really is. Beyond the labels, we're still different. LGBT fiction, both YA and adult, should reach out to queers of all types, language and all, because no type of being queer is better or more right than any other.

I stuck to my guns. The issue isn't resolved yet, and I don't know what will happen.

But I do know that The Italian Word for Kisses, which I was working on publishing with JMS Books at the same time as having this dispute with another publisher, was everything I wanted it to be when I started writing it.

Its characters are crass and crude. The jokes are off-colour. Tav is a thug who needs anger management, and Luca is way too proud for his own damn good. They insult each other and their friends, language and all. They love and loathe their families with equal passion, and they may be in love with each other, but they're also not blind to why their other half is a bloody idiot ninety percent of the time.

Being told not to write kids like me, that's my push-to-shove. And I'm sticking to my guns. Maybe it'll lose me the contract, or maybe it won't. But at the end of the day, it'll be my name on that book, whether with that publisher or with someone else. It will be mine.
And they, too, will be kids like me. 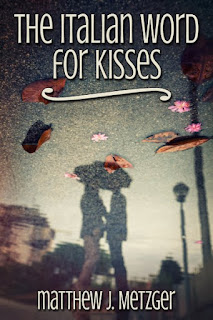 The Italian Word for Kisses:

It’s no secret Tav and Luca are going out. After the accident, it’s also no secret that new kid Jack Collins has a raging case of homophobia, and is not best pleased about having given the kiss of life to a gay guy. Either Luca quits swimming, or Jack is going to make him.

Tav favours the tried-and-true method of knocking Jack’s teeth down his neck, only he can’t really afford another school suspension. Luca favours just ignoring him, only ignoring a penknife being held to your throat at New Year’s Eve is downright stupid.

Thing is, Luca suspects Jack is a victim of something himself. And time is running out for Luca to get through to Jack, before Jack gets rid of him.

Pick up a copy at JMS Books or All Romance Cafe today.

The bang of the changing room door and the amiable greeting from one of the other boys caught Luca's attention, but the sudden, sharp silence made his blood run cold. All at once, Luca was both afraid, and angry with himself for being afraid. So he squared his shoulders and turned on his heel, folding his arms over his chest and meeting Jack's scowl with a glower of his own.

"What the fuck are you doing here?" Jack snarled.

"Fuckin' swimming. What about you?"

It was like the rest of the team didn't exist. Luca didn't dare break eye contact, and Jack -- although he tossed his bag onto a bench and unzipped his jacket, was zeroed in on Luca in a way that made the hairs on Luca's arms stand on end.

"Dunno what kinky shit you're into, Collins, but I don't follow your orders." Being both an older and a younger brother had made Luca able to bluff with ease, and despite the impotent anger, the tart tang of shame around the edges of his brain that this moron had somehow gotten one over him and seized some power in this stupid fucking game, his voice sounded -- even to him -- arrogant and bored.

"I said go," Jack repeated. The other boys hovered uncertainly, but Aaron and David had both closed ranks to Luca's shoulders, and Luca took a fortified breath. Aaron looked steely. David looked a little more confused, but determinedly hostile all the same.

"Like hell I'm going," Luca said. "You got a problem with a pouf on the team, you need to fuck off and get your head out your arse. I'm here to swim. I'm not going nowhere."

"What the fuck is going on?" David asked.

"He's a fucking faggot, and I won't have his kind here -- I warned you, I fucking told you, and you're still fucking here!"

"Yeah, Jack, lay off already, who d'you reckon you are anyway, you're new--"

"Don't fucking call him a faggot, twat," one of the other boys -- a lad called Ryan that Luca had never so much as spoken to outside of the club, and was in the year below them anyway -- sneered, and he shot out a hand to shove at Jack's shoulder.

"I told you to stay away!" Jack bellowed, and his hand vanished into his unzipped jacket. "I told you, I fucking told you --"

The changing room erupted; the flick-knife flashed under the sickly halogen lights, and Luca's back slammed into the wall of locker doors as Aaron and David shoved him back as one. Both doors -- one to the foyer and one to the pool -- banged loudly, and the bolshy kid, Ryan, lashed out with a fist, smashing into Jack's jaw from the side. A couple of men came rampaging over from the showers in their wet trunks, all the noise bouncing off the walls until it was dizzying. Coach arrived with a shrill shriek of the whistle, and the knife had gone somewhere but Luca couldn't tell where in the ruckus, and then Aaron's hand was on his shoulder and he was being steered off into one corner of the changing room, and --

A flush of hot, furious shame boiled up Luca's stomach and into his guts, and he twisted away from Aaron's hands and grabbed for his kit bag. He didn't need Aaron to fucking protect him. He didn't need anyone to protect him, he wasn't some pathetic little kid who needed their hand holding. He shouldn't need defending, he was a Jensen! He should be able to defend himself.

He grabbed his bag and bolted. As he fled up the stairs, a burly security guard and Coach were wrestling the knife out of Jack's hands in the corridor, both shouting at him, and Jack shouting back, face red and voice hoarse and shrill with fury.

"You fucking steer clear of me, Jensen!" he bellowed after Luca, who didn't dare look back. "F'you know what's good for you, you'll stay out of here, you fucking queer!"

Luca reached the top of the stairs, and ran.

About the Author:
Matthew J. Metzger is  an asexual, transgender author dragged up in the wet and windy British Isles. He writes both adult and young adult LGBT fiction, with a particular fondness for writing about people and places that don't usually make it into romantic fiction: the council  estates, the mentally ill, the people solving problems with their fists, and finding love on the local Arriva bus route.
When not writing, Matthew is  usually asleep or crunching numbers at his day job. He can be found on Facebook and Twitter, or contacted directly at mattmetzger@hotmail.co.uk.
Email Post
Labels: Guest Post