The End-ish... of the fish (by Jody Casella)

I'm not a huge fan of fish (as pets. I enjoy eating fish, but I digress). So I wasn't thrilled when my daughter asked for a fish for her birthday. Bluh, I told her. Fish are boring. You have to remember to feed them and clean out their bowl. Also, they die, in my experience, fairly quickly.

Exhibit A: the fish I had when I was a kid that swam around its bowl for a few weeks, boringly, until one night it jumped over the rim toward freedom. I found it the next morning curled stiffly on the shag carpet. So long, Fish, I hardly knew you.

Exhibit B: the two goldfish that my husband and I bought for our son when he was five years old that he promptly named Goldie and Fishie and that promptly died within hours of each other. Apparently you're not supposed to put two goldfish in a small bowl together. Lesson learned.

These exhibits did not dissuade our daughter.

Then she went to camp for a week.

Flash forward several days when my husband and I suddenly remembered there were two Michael Bubles swimming around in their respective bowls in our daughter's bedroom.

Make that one Michael Buble. (Side note: goldfish are really not a very hardy brand.)

The original Michael Buble was doing okay though, all things considered. He went on to live several more months and our daughter grew very attached to him, even shedding a few tears when we flushed his dead body down the toilet.

Which inevitably led to the purchase of fish number three, Michael Buble the Third, who swam around his bowl boringly in our daughter's bedroom for a good year and a half until she went off to college.

And then we moved Michael Buble into the kitchen --so we wouldn't forget to feed him-- where he lived another year and a half, and okay, I'll admit it, I grew kinda attached to him too.

All those mornings I'd shuffle blearily downstairs, flip on the light and make my coffee, and there was Michael Buble flitting around in his bowl, puckering his mouth at me and waving his fluttery tail. Some days we'd share a moment when I'd drop a food pellet into his bowl, a flick of my finger on the water's surface and a little return flick of his blue fin.

Last week Michael seemed to be slowing down. Resting behind his plastic plant. Ignoring his food pellets.

At dinner one night my husband and I watched him do a wild thrashy dance then settle himself sideways across the stony bottom of his bowl.

When we went to bed, his small blue body was more belly-up-ish than sideways-ish. Jiggling the bowl didn't seem to change the situation.

In the morning I shuffled into the kitchen yawning, forgetting for a minute what had happened the night before. I switched on the light, and the fish flickered to life. As I made my coffee he swam around his bowl, fluttering his tail and puckering his mouth at me like the old days.

Then he settled himself back down against the stones.

I know it's just a little thing, one small fish leaving this world, but for whatever it is worth, Michael Buble the Third, I am glad I knew you. 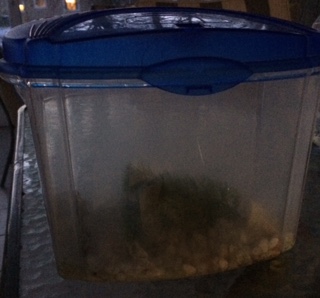