When you travel, would you rather go back to the same place year after year, or would you prefer to explore new vistas every time?

Whether by nature or nurture (probably a little of both), I like to visit the same places. Growing up, we vacationed every summer at a lovely inn in Northwood, New Hampshire, called Lake Shore Farm. We always went for the last week of August, along with several other families we knew, and over time we got to know other families who were on the same schedule.

At the time, Lake Shore was owned by a family, the Rings, who had owned the home since the 1800s and had operated the inn since the 1920s. They offered clean rooms and three meals a day at their rambling farmhouse (plus more modern annex) with square dancing on Friday nights, swimming and boating on the lake, and acres of woods to explore. And if you were going on a day trip into the White Mountains, Mrs. Ring would pack sandwiches for you.

For a suburban kid from Long Island, New York, this little piece of the country felt like heaven. Looking back on it, I know it wasn't wilderness, but it felt like it.

The inn sat at the top of a long sloping lawn that stretched down to the lake (paradoxically called Jenness Pond) where there was a dock for rowboats and a small beach for canoes. You could play all sorts of games on the lawn, and we did: tetherball, volleyball, kickball, croquet and lawn darts (grownups only). Then there was the woods, with a path that led to the private beach where you could go swimming, with the squishy, icky lake bottom beneath your toes and sudden cold spots that would send you squealing back to warmer water. If you walked off the path, you could pretend -- and we kids did -- that you were deep in the forest primeval. You could take out rowboats and have splash wars, or sit at sundown and listen to the loons and feel like you were absolutely alone in the world.

Because guests could be anywhere on the rather large property, the Rings had a big, old-fashioned hand bell that was rung for meals. This chore was a coveted prize among the kids, so much so that Mrs. Ring kept a sign up sheet in the kitchen, and one of the first things you did when your family arrived was to run to the kitchen, yell "hi" to Mrs. Ring, and grab the sign up sheet to see when you could get your chance to ring the bell. When your turn came, you made sure you were in the kitchen early, and you watched the clock tick off the seconds until you could go. When it was time, you took off running! You exploded through the house, ringing the bell, often accompanied by a bunch of other kids just for the fun of it. You rang the bell up the staircases, through the rec room, into the bathrooms, through the entire residence, all around the outside, ringing that bell the whole time. And then you'd arrive back, winded and grinning, at the front door and deposit the bell back in its place of honor in the kitchen.

Honestly, I'm getting a little choked up, remembering.

Across the street was a duck pond. Every day, Mrs. Ring set aside stale bread in a bucket for the kids to feed the ducks. So every morning after breakfast, we'd grab bread and go feed the ducks. The duck pond was also full of frogs, which this suburban kid with an abhorrence of all things slimy and wet learned to catch with her bare hands.

I'm telling you, this place was heaven.

There were no TVs in the rooms or in the common rec room. Instead, we played ping pong and pool (although at night, we had to cede the pool table to the adults). We played all the card games we knew and learned new ones. The moms often did crafts at night -- crocheting and embroidery and turning pompoms into little animals -- while someone read a book aloud to a bunch of kids. I remember "Rabbit Hill" by Robert Lawson was a perennial favorite. Another group might sit around a table, working on a puzzle. Even that could get competitive, hunting for the right piece. A radio might be tuned to the Yankees/Red Sox game as the season wound down into the final stretch, but more often, conversation was the only buzz. Over in the kitchen, at the table near the soda machine, the "big boys" (my oldest brother and his friends, in their teens) would play Risk long into the night.

At Lake Shore, I met my first Samoyed and my first Great Dane. I met a girl with a prosthetic leg -- it never slowed her down, and I remember vividly watching her hurl herself off the dock into the water -- and a girl from Canada who became a pen pal for a while. I did my first babysitting and my first dog-walking. I did a lot of growing up there, and a lot of writing, and a lot of dreaming.

When they tell you, in birthing classes, to think of a peaceful, safe place to go in your mind during labor, that's where I went. The lake, the house, those memories.

Unfortunately, all the pictures are at my father's house, mostly on his Super-8 films. I promised him the next time we visit, we're taking the films to Costco to get them transferred to digital so we can watch them again.

The one thing I do have is this little book from 1976 that contains the recipes and history of the Ring family and the house. Mrs. Ring did make some great food -- her spice cake in particular was amazing -- but it was the experience more than the food that I remember. 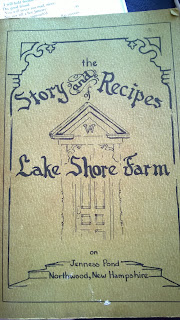 I'd rather have these memories of a place I visited again and again than the experience of going to lots of different places over the years. You?


Posted by Maryanne Fantalis at 8:00 AM