A Gift for Me, A Gift for You, Or How I Managed to Get the Ebook Rights Reverted to Me On My Traditionally Published Novel (Alissa Grosso)

In the spirit of the season, I'd like to give you a gift. To find out how to get your free ebook, you'll need to read to the end of this article. If you aren't interested in why I'm offering you this free ebook or how I'm able to do so you can just skip ahead and click the link there. For the rest of you, though, I'll explain why I'm giving this novel away for free and how I was able to secure the ebook rights from my publisher that made it possible to do this.

Ebooks? What are those?
My first novel, Popular, was published in 2011, but it was two years before this that I actually signed the contract for it. Ebooks existed at this time, and there was actually a small audience of early-adopter-types who read them, but they were hardly a mainstream thing. As a result the wording in my original contract concerning ebooks was a bit vague, and it would turn out to be not so advantageous to authors. Maybe if I had a literary agent when I sold my first book, he or she would have insisted that the language be changed, but not necessarily because nobody really gave a fig about ebooks back then.


Then Amazon introduced something called the Kindle and Apple brought out the iPad and all manner of similar e-readers and tablets followed, and suddenly ordinary people were reading ebooks on a regular basis. All of this, brought on a bit of a self publishing revolution, and suddenly the opportunity existed for self published or indie authors, as they were now calling themselves, to make a living from their writing.

It took mainstream publishers awhile to realize that there was money to be made from ebooks, and many are still figuring out how to do so. So, not a whole lot changed on the traditional side of things as far as ebooks went.

Out of Print, Sort Of
In 2013, shortly after the publication of my third book, Shallow Pond, I received a letter from my publisher letting me know that due to the dwindling sales numbers for Popular, it was going to officially become out of print, well, mostly out of print. In publishing terms, my first novel was successful. It earned out its (albeit small) advance, it went on to have three different foreign editions, but now that it was no longer shiny and new it wasn't selling like it once had. My imprint Flux was gladly reverting the print rights to me, but as the letter informed me, they would be keeping the ebook rights for an unspecified amount of time.

What this meant, is that while I could self publish my own print version of the book, I would not have the right to put out my own ebook version. As indie authors know, the bulk of their income comes from their ebook royalties. For me, Flux would go on selling the ebook version of Popular at their standard $8.99 rate, and I would go on receiving my puny percentage of the royalties. Although I contested this, I was told that there was nothing that could be done.

Why I Wanted My Ebook Rights Back
After, the initial 'no' from my publisher I put the whole thing out of my mind and went on with writing and life, as one does. In the meantime, my imprint Flux and its catalog got sold off to another publisher. Sales of my books continued to dwindle.

Though I kept writing, and though I did now have one of those magical literary agents, selling another one of my books to a publisher, was proving to be a difficult task. The unpublished manuscripts were starting to pile up. I was forced to answer the well-meaning question from friends and fans about when I would have a new book out with a cryptic, "When the publishing gods allow it."

And if all this was not enough to demoralize a writer, there were the near daily Google alerts I received letting me know that one or more of my books was available as a free download on some or another piracy website. I tried to console myself that these .ru sites were more than likely just scams to infect computers with viruses and malware and may not even give those gullible enough to believe their claims full copies of my books, but still it was salt in the wound for me.

I began to consider giving self publishing a whirl. So, I started doing some homework. Everywhere I looked, I saw the same advice, an email mailing list was the key to making it as an indie author. The other advice I saw again and again was that the key to building a mailing list was to give a book away for free in exchange for a mailing list sign up. For me, there was just one problem with this, I didn't want to give away one of my unpublished books for free.

It made more sense to give away a book that had been out there for some time, a book that I had already made some money on, a book that for those undeterred by sketchy Russian websites was already available for free. What made the most sense was for me to give away an ebook copy of Popular in exchange for a mailing list signup. I needed to get those rights reverted to me.

Asking Nicely
As I mentioned earlier, I had no literary agent when I sold Popular. Some advice I read suggested that I should hire an intellectual property attorney to secure the rights to my book, but I'm a self starter, and I decided that I would first try to do things on my own.

So, I wrote a letter to my publisher. As I mentioned, this was not my original publisher, since the imprint had been sold. They were now the publisher for all three of my books, but while my second and third books remained in print, Popular was the only one that was only available as an ebook.

In my letter I cited the dwindling sales numbers as the chief reason for requesting the rights reversion. At the time of my letter, I was making less than $10 per year from sales of this book. I received my most recent six-month royalty statement a short while ago, and my earnings were less than $2. What constitutes low earnings will vary from book to book, but it was clear from the royalty statements that sales of Popular were going steadily down.

I didn't know what to expect after sending my rights reversion letter. They could have very easily said no. It certainly didn't cost them anything to hold onto the ebook rights, and there was the small amount of income that it generated for them. The wording on the original contract was vague enough on the matter of ebooks, that they could have argued they could keep them indefinitely.

If they said no, I had a plan to record an audio book version of Popular (I had the audio rights) and use that as a giveaway item to encourage mailing list signups, but that was a less than ideal situation. Audiobooks have a select audience, and the delivery methods for a free audiobook, were not quite as established as those for a free ebook. Plus there was the whole matter of recording the audiobook, no small task. I also considered hiring an IP lawyer to help me to secure the ebook rights to the novel, but I wondered if this was more trouble than it was worth. After all, my chief reason for wanting the rights was to offer the book for free, so it wasn't going to be a money-making venture for me.

As it turned out, I didn't need to worry about either of these Plan B options. Shortly after sending my rights reversion request letter, I received an email from my publisher agreeing to return the ebook rights to me. It was an awesome gift for me.

Tips For Getting Your Rights Back
If you sold your traditionally published book without an agent and are looking to get your rights back, here are some tips to do so:
1. Look at the language in your original contract
2. Be professional and polite
3. Cite your actual sales numbers and royalties
4. If sales of the book are on a continual downward trend, show this
5. Send an official print letter 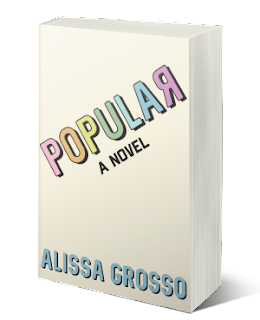 A Gift For You
In the spirit of the season, I'd like to offer you a free copy of my first YA novel, Popular - It's not your average tale of high school popularity. In exchange, all I ask is your email address so that about once a month or so I can send you a message to let you know about what's been going on in my writing life or about any new books I have coming out. Click here to get your free book today.

Alissa Grosso is the author of the YA novels Shallow Pond, Ferocity Summer and Popular. You can find out more about her and her books at alissagrosso.com.