This month, we're talking about gifts and giving. Not to sound corny or anything, but the absolute greatest gifts were given to me by my husband: our two sons.

Like so many parents, we enrolled our boys in Cub Scouts when they reached the proper age (6 and 7.) While we're not what one would call "outdoorsy" people, we wanted our boys to have those experiences and judge for themselves.

(Side note: We learned they're not the outdoorsy types either.)

That being said, we all loved the service projects associated with the group. The boys visited nursing homes, raised money for charities and helped kick off our local Toys for Tots campaign.

I remember that night so clearly. One of the marines representing the local drive attended as the guest of honor. He was resplendent in his uniform! Both of our boys were captivated.

And oh, how he impressed upon us the importance of the toy drive...conveying how so many families have so little. How too many children will wake up Christmas morning without any presents...unless we help.

The boys were unusually quiet as they climbed into the car afterwards. "How about we stop and buy some toys for the kids on the way home?" I asked.

They both nodded, although I could tell something was bothering them. So I asked, "What's wrong, pups?"

"How could this happen?" Steve asked, his eyes wide and teary. "I thought Santa brought toys for everyone. Why would he leave any kids out?"

You see, at those ages, our boys still believed.

(Side note: Okay, we all still believe...and everyone still has to write their letters to Santa, first thanking him for everything we already have, and then asking for something you'd love to find under the tree. If you don't, you get underwear. It's a rule in our house.)

Since I wanted them to keep believing, I said, "Sometimes families lose their homes in a fire, or a flood. Sometimes they have to move...and Santa isn't able to find them. He relies on us to help him, since the Marines know where they are."

"Oh!" His little face brightened. "That's a good idea then."

So off we went to the toy store. We stood in the Lego aisle for at least 45 minutes. My seven-year old, Alex, would take a box down, carefully study it, put it back and move on to the next one. "Boys, the store will be closing soon," I said. "We have to make a decision."

Alex frowned. "Mom. This is important business. We have to chose the very best toys. We're helping Santa."

I think at that moment, they internalized the "gift "of giving. Did I mention these boys are my bestest gifts?

From our family to yours...

Wishing everyone the happiest, healthiest, holiday season, filled with, and surrounded, by those you love. There's no better gift than that. 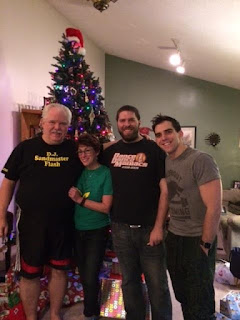