Battlestar Galactica, or How My Crush Led to My Career

I'm not going to write about my first crushes because everyone else has covered them so well. Davy Jones? Shaun Cassidy? Paul McCartney?

No, instead I'm going to talk about one of my childhood friends and how our friendship, and our crushes, helped me along the path to being a published author.

I was astonished by Lynn.

This is the only photo I have of Lynn, and it's from 6th grade graduation. I took it with the family's Brownie camera. (If you don't know what a Brownie is, look it up. They were ancient even then). As bad as this photo is, I love it because it captures so much of Lynn's essence. How many girls then would pose for a photo like this, hands so confidently on her hips, challenging the world, that blaze of unruly, uncool, un-70s hair tumbling around her head. Yeah? You got a problem with me? her posture says. With Lynn as a friend, I could believe in myself. You know what I mean? 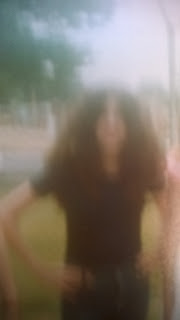 Our friendship began when we were paired up as reading buddies in fourth grade. Both accelerated readers, we worked our way through the assigned reading workbook by the end of September. Our teacher wisely set us free in the library after that.

We bonded over everything we had in common, not what we didn't. Star Wars. Music. Books. The Hardy Boys TV show. She took Frank (Parker Stevenson), I took Joe (Shaun Cassidy). Besties.

And then we discovered the wonderfully awful Star Wars wanna-be called Battlestar Galactica.

Since we were true best friends, we never fought over a guy, not for a minute. Our Hardy Boys fancy transferred seamlessly to this new duo. Lynn, being Lynn, went for bad boy Starbuck, played by Dirk Benedict, and I fell for straight arrow Apollo, played by Richard Hatch.

It was a goofy, stupid show but we loved it. Every Sunday night, we watched the show and every Monday we rehashed the stories together at school.

At some point, we started rewriting the stories with us in them.

Today, there's a name for this:  fan fiction, or fanfic. At the time, we had no idea what we were doing or that other people did it. This was just what we did.

With Star Wars, we had each taken turns being Princess Leia. With BG, we took it to a whole new level:  we invented characters for ourselves and wrote ourselves into the story. We rewrote the entire series, from beginning to tacky end.

I still have the embarrassingly awful text that emerged from the years-long effort we put into it. Even after Lynn moved away to live with her father in Queens, we still wrote, taking turns and mailing the sheets of long-hand back and forth. The best was when we could manage a sleepover weekend. Then it was non-stop writing. And junk food.

This, for the first time in public, is the title page of the horribly bad fan fiction we wrote of Battlestar Galactica. Yes, it was so big, so epic, so REAL that it had a title page. With fancy block letters.


And I had the honor of writing the opening sentence. You can see my budding genius in those first words: "Commander Adama stood before the blazing star field." 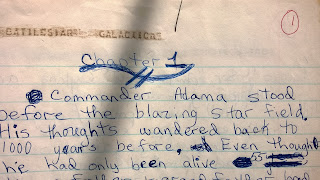 It's horrible. I can't even look straight at it. I have to avert my eyes.

But you know what? That crush, that passion, that love pushed us to write a massive piece of work -- basically a complete novel(ish) -- without which, who knows where I'd be today.