I know I'm supposed to write about embarrassment this month, but I just haven't been able to focus on that. Or on anything much related to writing, to be honest.

I'm launching my kids in some pretty dramatic ways, and I'm rather emotional about it.

My son turned 18 this year and graduated from high school. But we all agreed that going straight to college was not going to be the right path for him, so he spent much of his final semester deciding on a gap year scenario that would work and figuring out how to afford it. He chose working in Africa -- three months in Kenya, six months in the Gambia -- and worked basically full time all summer to earn enough money so that, along with gifts from family, he could go. And come back.

The equipment costs alone were astounding. And the vaccinations. Not to mention the flights, of course.

This is my son -- my youngest, my 18 year old child -- in the airport on September 2 -- heading off on a series of international flights all by himself. 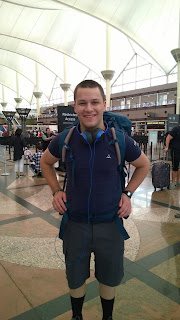 He made it to Kenya safe and sound after 30+ hours of travel. Thankfully, there was WiFi in the Mombasa airport so we were able to Facebook chat (he has no cellphone there) and learn that it was nearly 90 degrees at 4 am and he was exhausted but okay and had all his stuff.

And there were monkeys in the airport.

What an adventure he is on.

I'm thrilled for him.

If we're lucky, we'll get Facebook posts from him once or twice a month from Kenya. When he gets to Gambia, he'll have more regular internet access so we'll have more contact, but that's not for a long time.

My elder child, who just turned 20 and has left their teens behind, departs in two days for their study abroad semester in London. Since they will be in London, we'll have more contact so I'm not as worried, and I'll be visiting in December after the semester ends because LONDON!

Here's a picture of their suitcase. Remember, they leave in two days: 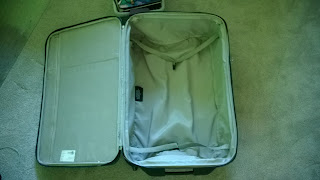 Posted by Maryanne Fantalis at 10:44 AM