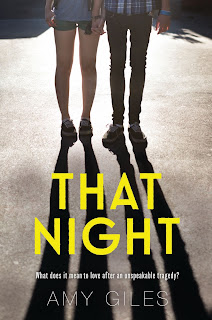 When a young person dies, whether in an accident or from an illness, an entire community grieves. Maybe the town plants a tree in his honor, or the school establishes a scholarship in her name, small and grand gestures designed to allow the memory of the deceased to live on. But what happens to a community when gun violence claims enough young lives to fill a classroom in a matter of seconds? This should be the premise for a dystopian novel, but sadly it’s a story rooted in reality and the idea behind my contemporary young adult novel, That Night.

It’s no big secret that America has a gun problem. More than 30,000 men, women, and children are killed with guns each year in the United States.[1] According to the Brady Campaign to Prevent Gun Violence, 342 people are shot every day in America.[2] But it’s the mass shootings, the ones with the greatest loss of life, that get the most media attention. And do they ever get attention. Logos and haunting melodies plaster the airwaves almost immediately, as if they’ve been “in the can,” designed and pre-recorded, waiting for the next massacre. Once the story runs its course after a few days, the news crews pick up their gear and move on. But how is that the end of the story? For the survivors of that shooting, it’s only the beginning. They may have walked away from a mass shooting, physically unscathed, but they’ll no doubt face a lifetime of trauma from the event. That Night explores how the repercussions of gun violence extend well beyond the reach of a bullet.

Thanks to social media and the twenty-four hour news channels, teens thousands of miles away from a shooting get to experience the trauma of gun violence almost first hand. Mass shootings and the fear of a mass shooting have taken a psychological toll on teens. It’s the unpredictable nature of the crime that’s most terrifying. People are targeted not for something they did, but for where they happen to be at that moment, at school, a concert, a movie theater. Their shattered sense of safety is why nearly sixty percent of all high school students fear someone will come to their school or community with a gun some day.[3]

Because the constant threat of terror is already so damaging to the mental health of today’s teens, That Night does not focus on the violence of a mass shooting, but on the loss and grief in the aftermath as well as the hope and healing. The story begins a year after a mass shooting claimed eighteen lives in a movie theater. Lucas struggles with the guilt of knowing his older brother, the football star with a promising future, died by selflessly throwing himself on top of Lucas to save him. Jess feels isolated, having lost not just her brother that night, but also her best friend who is now across the country in a special school that specializes in trauma. Their families and friends, the entire community, are all affected by the tragedy; everywhere they turn, they see it in someone’s eyes. Reminders of that night, memories of the victims and the violence.

In writing this story, I wanted to steer clear of sensationalizing the violence. It’s already too prevalent in our every day and I did not want to give a weapon or a murderer any more attention that they already receive. The challenge was walking the fine line between representing the trauma the survivors endured as accurately as possible without actually painting a picture of the graphic violence. In the first draft, however, I did include scenes of what happened that night at the Balcony. But those pages were for my eyes only, so I could write from both Jess and Lucas’s perspectives knowing the trauma and burden they carried with them every day. And once the first draft was complete, I deleted those scenes. Not because I don’t have faith in teenagers’ ability to read difficult subject matters. Quite the opposite. I believe that teens need honest books that reflect not just what’s happening in the real world, but what’s also happening in their world. But when it came to writing about gun violence, I chose to omit the gritty details. There’s already too much terror surrounding this topic; I didn’t want to be complicit in fueling that fear.

So instead of focusing on the violence, I addressed the repercussions. The embalmed bedrooms, untouched since the tragedy. The retainer in the medicine cabinet a year later. The fiancée who wears the whisper of a diamond on her finger, a promise of a future together that was cut short. A daughter who has to fend for herself when her mother is too depressed to get out of bed. A son who can’t shake the feeling that the universe made a mistake and took the wrong brother.

But That Night is also about the redemptive power of love. At first, Lucas has misgivings about working with Jess at their part-time job together. With her presence come the constant reminders of that night. But over time, they learn to trust each other and become friends. They discover that their shared experiences actually help each other heal. Who else could possibly understand the range of emotions Lucas experiences every day, except for someone who is going through it herself? And on their road to recovery, they find love.

In fiction, we can write a happy ending to even the most tragic stories. In real life, we have to work harder. Let’s help make #neveragain the next happily ever after. 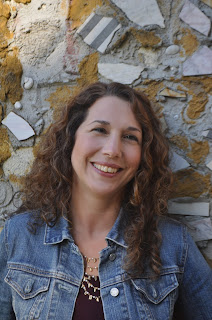