The disguises we wear and the secrets we keep (Brenda Hiatt)

With Halloween just a week away, I’m taking the Disguise angle on this month’s topic—especially because secrets and disguises are an absolute favorite theme for me as both a reader and a writer! A few years back, a conference speaker challenged the writers present to figure out what themes we tend to keep coming back to when we write. She said those themes define our “core stories.” When I did that, it quickly became clear that “secrets revealed” is a biggie for me. I love to reread favorite books, and when I do I always eagerly anticipate all those “big reveal” moments where the truth (whatever it is) finally comes out. And when I’m writing, those are the moments that always get me juiced enough to write everything that leads up to them. Big secrets or small, they all work for me!

Looking back over all the books I’ve written, I realize that every single one has some element of the “secrets” theme. Sometimes it’s self-discovery, sometimes it’s discovering an important truth about another character, often it’s both. 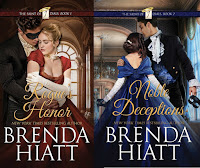 Shoot, I wrote a whole Regency series around the theme of secret identities with my six Saint of Seven Dials books, a sort of cross between the Robin Hood legend and the “Dread Pirate Roberts” from The Princess Bride, where each “Saint” retires (when he finds true love, of course!) and hands his “mask” off to another, who becomes the next “Saint” who will rob from the rich to help the poor in London’s slums.

It should come as no surprise that I continued with a “secrets” theme when I began writing my young adult Starstruck series. In the first book, heroine Marsha encounters one Big Reveal after another as she gets closer and close to the full truth about herself and the secret world hiding in (almost) plain sight in the little town of Jewel, Indiana. Book 2, Starcrossed, has its own, different series of Big Reveals as both readers and my heroine figure out what’s really going on and more than one character’s “mask” is stripped away, layer by layer. In Starbound, book 3, my main characters have their own big secrets to keep, and much of the tension comes from wondering when those secrets will be revealed (and how disastrous those revelations are likely to be). Starfall includes a whole section where the reader knows way more than the hero does (and is dying for him to figure things out). 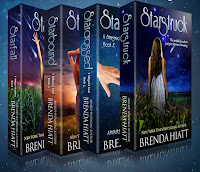 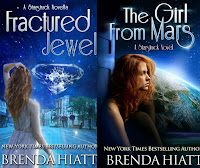 Fractured Jewel, my “bridge” novella to the next two books in the series, hinges on necessary secrets being kept—and the potential consequences of untimely “leaks.” My heroine in The Girl From Mars is a little too eager to believe deceptions that play into her world view and learns to dig beneath her preconceptions about herself and her world.

And in The Handmaid’s Secret (which just released YESTERDAY!!) not only my heroine but everyone around her has bought into a “truth” that turns out less true than anyone suspected.

So yeah, I’m all about secrets and disguises and how there’s always more to a story than appears on the surface. Is it any wonder I love Halloween? As a kid (and okay, sometimes as an adult), I loved dressing up as someone totally unlike my “real” self (whoever that is! LOL) and even in those years when I don’t bother with a costume, I love seeing all the inventive disguises our door-to-door trick-or-treaters come up with. (Yeah, I’m one of those people who give out extra candy for really good costumes.) I passed this love along to my daughters, by the way. Here’s my eldest and my grandbaby dressed for Halloween last year! 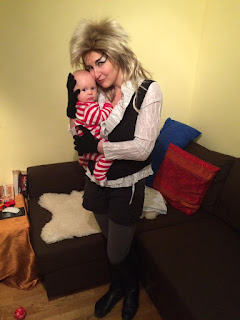 With that said, Happy Halloween! Have fun with disguises this year, whether you wear one yourself or just get a kick out of the ones that come to your door. There’s definitely something to be said for hiding reality with make-believe…as long as we never completely lose sight of the truth.

Brenda Hiatt is the NY Times and USA Today bestselling author of twenty-four novels (so far), including sweet and spicy historical romance, time travel romance, and teen science fiction. Look for The Handmaid’s Secret, book 6 in her Starstruck series, releasing THIS WEEK!