Anyone remember those 'It's the right beer now' commercials from the 80s? Anyone? 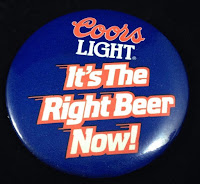 Well, anyway. I'm not sure I'm one to judge what the right book is. Every idea I come up with is a winner (in my mind). I've only ever abandoned a book project once. It's only when I finish that I realize I've wasted a year on an unworkable mess. Or the publishers don't know a good thing when they see it. Yeah, that's probably it.

Some of my great ideas that will never see the light of day:

Mysterious Ways: Katrina, a young, aspiring artist befriends a mysterious boy who claims that he's God. He makes a strong case for it: everything he attempts is successful and he uses his skills to improve Katrina's life. Too late does she realize that gods require worship and unwavering devotion.

I actually got paid an advance for this one and we were discussing cover art when the editor quit and the project was cancelled. The references in this book are rather dated by now and I've used a lot of these themes in subsequent books.

Sundown: Another editor asked me to write this. A mysterious force blocks the sun out of the sky, plunging the world into darkness. Three scrappy teens travel across the U.S. trying to work out the cause before the world plunges into permanent night.

Great idea, but as it turns out, I can't write science fiction. It was supposed to take place about fifteen years in the future, but the futuristic technology I came up with is already hopelessly out of date.

Hell is a Kentucky Walmart: Another editor suggestion. Two teenagers with terminal cancer fall in love and take a road trip, trying to enjoy the last bit of life before their health fails.

Guess what happened? Yeah, another author, whose name I dare not speak, came up with the same idea slightly earlier. This is the only book I never finished.

Becoming: A boy named Shannon applies to be on a reality TV show where he'll get to shadow an actress who is both his idol and his crush. Much to his surprise, he's selected. Even more surprising, Mila, the young producer, assumed that Shannon was a girl. Unable to change the show at the last minute, Mila decides to change Shannon: he's going to spend the summer as a girl, and no one else is to know.

I really liked this idea, kind of a teenage Tootsie, with a guy discovering the pros and cons of being female. My agent, however, said there just wasn't enough personal growth in the main character to make it worthwhile.

In addition, I have two other books I'm still trying to find homes for.

I guess what I'm saying is that I absolutely believe in any idea I have. But what do I know? I thought camera phones were a dumb invention.