There’s no question that some story ideas are better than others. Some are harder to write than others, while some just aren’t a good fit for a particular writer. An idea that becomes a superb book in the hands of one writer may not spark any excitement at all in another…even if that other writer later enjoys reading the story the first writer produced from it. No matter how objectively good an idea is, if an author can’t get enthused about writing it or doesn’t have the skills needed to do it justice, it isn’t a good idea for that writer. Or maybe it really is a great fit for that writer, just not at that particular time.

Here’s an example of what can happen when a writer has the “right” story idea…at the wrong time:

As most of my readers will attest, I’m a fairly slow writer. Particularly by today’s indie standards, where one common strategy for success involves publishing quickly—in some cases as quickly as a book a month. I, on the other hand, am doing well to publish two books a year and often don’t manage even that. Because I write in two fairly distinct genres, YA and historical romance, it’s a challenge to keep both sets of readers satisfied given my slow writing pace. The solution I hit upon was to alternate genres with the aim of releasing one book of each per year. Sounds like a plan, right?

Unfortunately, my Muse had other ideas.

After publishing The Girl From Mars, my most recent teen science fiction romance, I rolled up my sleeves and dove into my next historical romance. I’d been planning this book for a while. In fact, it was (loosely) based on the last Regency proposal I sent to Avon/HarperCollins back in my traditional publishing days, a third installment in a sort of spin-off series linked to my popular Saint of Seven Dials series. I knew my main characters, both of whom had been featured in the previous book. I had a plot, one I liked much better than the one in my original proposal. What I didn’t have was the proper level of enthusiasm.

Oh, I started off well enough, laying the necessary groundwork, but after two or three chapters I felt the “juice” leaking out of my story. I tried all of my usual tricks to re-energize the writing: interviewing my main characters, having them each write first-person diary entries, re-reading a few favorite books in the genre. But the harder I pushed, the more my Muse teased me with a different idea—one for a story set in my YA Starstruck world. I jotted down some notes about that other story, my usual strategy when a shiny new idea tries to lure me away from the book in progress. It’s a method that has worked for me numerous times in the past, but this time it failed me.

One morning I woke up thinking about the YA book and decided on impulse to give it free rein for a few days. Why not? Odds were I’d hit a snag early on anyway. Then I could return to the historical, my Muse temporarily appeased. I didn’t tell my husband or my critique partner what I was doing, instead making it my “secret” project for the next week and more. But after several chapters spilled out of me in less than half the time it had taken me to write far fewer words on the historical, I surrendered to my Muse and owned up to what I was doing.

I can’t claim that The Handmaid’s Secret was the easiest book I ever wrote—far from it!—but until it was done, I never felt any temptation to go back to my unfinished historical romance manuscript. This was apparently the book I needed to write at the time. I kept right on, writing and then revising, until I released it in October—barely six months after first being mugged by my Muse. 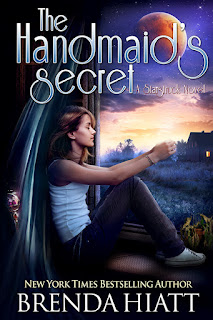 Only then did my dictatorial Muse let me to go back to my poor, neglected historical…and a funny thing happened. When I pulled up the file that had been giving me such fits half a year earlier, the writing went much better than before. And now, just five months later, I’m almost finished revising the first draft of A Taste For Scandal and expect to release it in late April or early May. 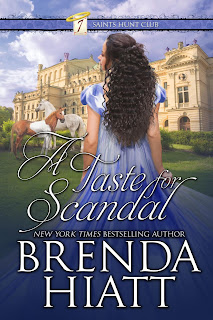 The lesson I took away from this experience? When my Muse keeps whacking me over the head with an idea that won’t be denied, just grab it and run with it. Because even if I don’t fully understand why, that is apparently the story I’m supposed to be writing.