Skip to main content
Labels
Posted by Brenda Hiatt May 24, 2019

Like all authors, I love it when a reader is so engaged with one of my stories that she/he feels compelled to write to me and gush about it. Teen readers, in particular, sometimes write the most amazingly ego-gratifying emails! One question I’m not-infrequently asked by these avid fans is, “Why don’t you make this book/series into a movie?” You know, like that idea never even occurred to me until that reader suggested it. And like I’m intentionally depriving my fans of experiencing my characters and their stories on the big screen because I just haven’t gotten around to it. Or something.

Sure, I’d LOVE to see my books made into movies—or even better (in my opinion) a TV series. If I could wave a wand or simply fire off a letter or email to make that happen, you can bet I’d do it in a heartbeat. Alas, that’s not how Hollywood works. There are lots and lots and LOTS of books out there. That makes snagging the attention of someone who has the power to get the Hollywood wheels turning so difficult that my odds of seeing my Starstruck books on the big or small screen are vanishingly small. This is true even though I happen to have a daughter with Hollywood “connections,” who’s worked in the entertainment industry in LA for years. (Yes, she’s tried to pitch my books. And no, we’ve had no serious nibbles. Yet. Hope springs eternal.)

Meanwhile, my other daughter, who is a singer and actress in Germany, was recently fired with the idea to turn Starstruck, the first book in my series, into a MUSICAL. She and a musician/songwriter friend have been working on that, with my blessing, and it’s been a fascinating experience! She’s done a fabulous job of condensing my 110,000 word novel into a 2-hour play (complete with lyrics!) without losing any of the “heart” of the book. In fact, reading the “book” for stage, I have to wonder if I was way too wordy with the novel! Her friend has already put a few of the songs to music and I’ve heard a couple of rough cuts (him playing piano and her singing). Very, very cool! 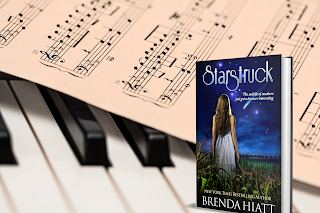 Her hope is that “Starstruck, the Musical” will appeal to high school drama departments and community theaters, and she’s written it with that in mind. (No, no real Broadway aspirations here, though hey, never say never!) She’s been careful to allow for scene changes and costume changes, and has even come up with ways the “special effects” might work on stage with a small budget. I’m hoping/planning to go to Germany later this year when they start workshopping it, which should be a lot of fun. Even if it never earns us actual money, I really, really hope it gets produced at least once, because I’m dying to see it!

Of course, I’d still love for my daughter in Hollywood to get some studio attention for my book/series, since these definitely aren’t mutually exclusive projects. But while waiting for that lightning to strike, I plan to enjoy watching the fun new musical take shape. I also plan to keep writing the books. Because the MOST frequent question I get from my readers is, “When is your next Starstruck book going to be out?”