Skip to main content
Labels
Posted by Fae Rowen May 05, 2019

My Books Have Always Been Movies—In My Mind

I wrote my first book, a medieval not-so-fantasy, because every night I fell asleep to the characters and their intertwined stories. When the falling-asleep dream continued and expanded for more than a week, I sought the counsel of an English teacher friend.

Thank heaven, she pronounced me sane…but with a story to tell. She suggested I started writing the story.

When I came home from work, I'd write for two or three hours (until my husband asked if he was having cornflakes again for dinner) then, when I went to bed, I'd watch the movie in my head.

I felt like a director—changing little things, talking to my characters about how they needed to act differently, revising their dialogue—until what I'd already written was just right. Then, until I fell asleep, I'd relax and watch the next installment of my movie.

There was no urgency to my writing. Had I known "the story" would end up as a four-hundred page book nine-months later, I never would have sat down in front of the computer. After all, I was a reader, not a writer. But, like many things in my life, it turns out I didn't know everything.

As I wrap up my fifth book, my process has changed. I've taken classes, learned about novel structure, character arcs, putting emotion on the page, dialogue, body language. But every page I write, I still see as part of a movie. 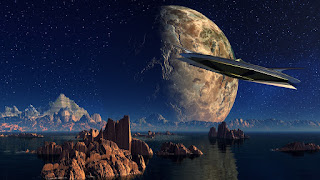 I write speculative science fiction, but I don't worry about the special effects as I write. After all, I'm a writer, not a movie producer or director or actor. I put my characters through some tough situations. In each book there is a good chance people will die if they don't live up to their potential. Things will be blown up. Technology will fail. Space vehicles will crash. And that doesn't count the problems other people make to complicate my characters' lives.

I don't try to make my books like any particular movie, because they are my books, not someone else's. However, editors, producers and screenwriters have compared them to some blockbusters, which gives me hope that someday I'll get to step out of a limo at the premiere of the first movie made from one of my books. Honestly, I don't care which book becomes a movie first. I'll admit to being greedy. I want to see them all on the big screen.

I feel that moment of settling into my theater seat. And the two-hour thrill-ride of the movie itself. No one in the theater will know who I am. No one will wonder who provided the story. But they will have glimpsed part of my universe and felt what my characters know, lived with my themes of love conquers all and how to treat others for that short time.

It is my sincere hope that one day you'll sit down with your box of popcorn and enjoy a foray into one of my worlds. In fact, it's why I continue to write.

﻿Fae Rowen discovered the romance genre after years as a science fiction freak. Writing futuristics and medieval paranormals, she jokes that she can live anywhere but the present. As a mathematician, she knows life’s a lot more fun when you get to define your world and its rules. P.R.I.S.M., Fae's debut book, a young adult science fiction romance story of survival, betrayal, resolve, deceit, and love is now available at Amazon and Barnes and Noble.
Email Post
Labels: Book to movie Fae Rowen speculative fiction theme