That Time I Unintentionally Terrorized My English Teacher (Alissa Grosso) 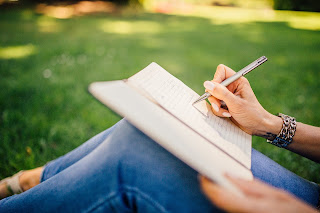 I have been writing for a long time so I have a lot of cringe-worthy writing pieces in my past, but the one that mortifies me the most is something I wrote when I was in high school.

I need to add the caveat that this was a very long time ago. The term "school shooting" was not yet a term anyone was familiar with. The Columbine massacre wouldn't happen for another seven years. As you will soon see this likely explains why I was not expelled from school for writing a short story. In other words, kids, don't try this at home. Or at school, or anywhere really.

Okay, so my high school had a gifted and talented program, and nerdy teen girl that I was, I was in it. The way it worked was a sort of independent study, where we came up with a project we wanted to work on then asked a teacher to be our advisor for the project.

I had the idea that I wanted to write a series of short vignettes about my kooky family. My inspiration was My Life and Hard Times by James Thurber. If you're in need of a book to make you laugh, I highly recommend it. In particular "The Night the Bed Fell" is one of the funniest things ever written in the English language. So, as a sophomore in high school, I decided I was going to pen my own series of Thurberesque anecdotes and asked my freshman English teacher (my current one was due to take maternity leave) to be my advisor. Mrs. Keller had no idea what shes was getting herself into when she agreed.

Thankfully for me, my family provided me with copious material. I don't remember all the vignettes I wrote but can recall I did a piece on my grandparents and a dirty dime. You might think that subject matter couldn't have warranted more than a paragraph or two, but that just proves you don't know my grandparents. I also remember writing about my family's difficulties in taking road trips to Maine including one unforgettable Christmas journey that if you wrote it as a scene in an over-the-top comedy screenplay someone would certainly scoff at it as being completely unbelievable.

Anyway, I don't know if it was because she grew tired of my comic anecdotes or if it was simply because she was trying to be a good advisor and push me out of my comfort zone, but Mrs. Keller challenged me with writing a work of fiction, a short story. I swear, I wasn't mad at her for requesting I try my hand at something new, but probably that was the impression she got when I turned in the assignment.

For someone who had previously submitted pieces that were comical in nature, I went a very different route with my short story. My short story "The Homework Assignment" was dark and disturbing in nature. In fact, very disturbing if you happened to be someone who was teaching creative writing like the protagonist of my story.

The general gist of it was that a creative writing teacher is at home grading the stories that his students have submitted for an assignment and comes to one titled "The Homework Assignment." As he starts reading he hears some bumps in the night noises, but what really unsettles him is that the story is about a teacher reading a short story submission at his home while the student who wrote the assignment lurks inside preparing to attack the teacher. More upsetting is that the short story describes a living place that is frighteningly like his own, something his student couldn't possibly know unless he was in the teacher's house.

Well, I'll save you all the gory details, but I assure you there were some. In the end, the creative writing teacher met with a grisly fate. "The End" typed at the end of the submitted story had a bit of a dual meeting for that poor character.

I still think the story was a good one, though I'm sure the execution might have been a bit clumsy and cliche-riddled given that I was in my teens, but what I find mortifying about this story is that I thought it would be a good idea to write it and submit it to my own teacher as an assignment.

What was I thinking? Couldn't I see how something like that might freak out my teacher? I don't know if that extra creepy and disturbing story caused my teacher undue stress or caused her nightmares, but if it did I offer her a belated apology. It was never my intention to terrorize her. I never really thought things through.

For her part, Mrs. Keller never really seemed too bothered by the story or else she hid her fears well. More importantly, she did not report me to the principal or school psychologist, but as I said, those were different times. I can't say for sure, but I think she probably had a newfound appreciation for my harmless, humorous family anecdotes after receiving that doozy of a short story.

After "The Homework Assignment" Alissa Grosso has gone on to write some additional thrillers, but she's also written some tamer novels that hopefully won't inspire any nightmares. You can find out more about her and her books at alissagrosso.com.