Since we’re writing about holiday traditions this month, I thought I’d talk about one that might not be familiar to most of you, but that I’ve come to love—a German tradition, but with our own family twist.

The first Christmas after my older daughter had moved to Germany, she brought home the tradition of the Feuerzangenbowl. It involves a big pot of Glühwein (hot mulled wine) with a rum-soaked flaming cone of sugar suspended above it so that the melting sugar (and rum) drips into the pot. A festive sight, to be sure! According to our daughter, the tradition also involves standing around the flaming punch and singing Christmas carols to the “Fire Singing Bowl” as the sugar burns. Happy to have her home for the holidays, we cheerfully obliged and thus was born an enduring family tradition for Christmas Eve (to follow our traditional Christmas Eve pizza).

Some five years later (after I’d learned a wee bit of German), I discovered to my amused chagrin that my daughter had fabricated part of the story. You see, Feuerzangenbowle does NOT, in fact, mean “Fire Singing Bowl” (though it does sort sound like that). Literally, it translates into “Fire Tongs Punch.” My daughter added the whole bit about singing Christmas carols, since she's always adored doing that and has always pestered the rest of us into singing along. (She’s a singer, you see. The rest of us are…not.)

Still, the singing does add some extra fun to the tradition, especially as that 150 proof rum starts to kick in! And the rest of the tradition really is ubiquitous at Christmas time in Germany, both at private parties and their numerous Christmas markets.

This, I’m told, is the largest Feuerzangenbowle in the world, at a Christmas market in Cologne (where my daughter lives):

And here is how it’s typically served at those open-air markets, often with paper cones of candied nuts: 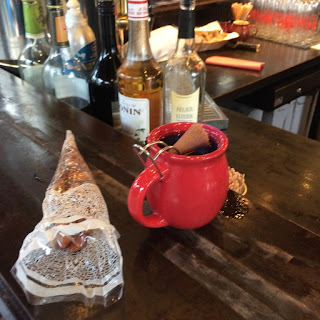 This year our extended family had planned to spend Christmas in Germany, but in 2020 that obviously couldn’t happen. (Sad sigh) Even so, through the magic of videoconferencing, we're going to at least attempt our usual family Christmas Eve Feuerzangenbowle tradition from opposite sides of the Atlantic. Wish us luck!