One drawback to posting late in the month is that by the time it’s my turn, often my first (or first several) ideas for our topic have already been done. So it is this month. The previous posts have wonderfully highlighted various real life and fictional heroines, many of whom I also had in my idea file. I considered writing (as Patty did in part of her post) about the heroines I myself have put into books, or elaborating on some of the real ones already mentioned. But then today, as fate would have it, I just happened to run across an article about a heroine I’d never heard of before, but whom I now feel compelled to share with you: Lady Mary Wortley Montagu. 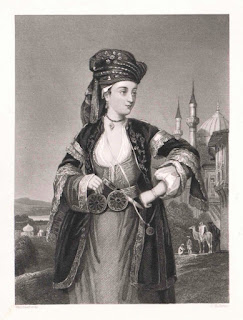 Three centuries ago this year (1721), as England was suffering a massive outbreak of smallpox, Lady Mary recalled something she had learned a few years earlier while her husband was serving as Ambassador to the Ottoman Empire. It seemed the women of that region had discovered, and passed along by word of mouth, a process of inoculation that involved scratching the skin of healthy people with a small amount of pus from a smallpox sufferer’s sores. As she herself had already been badly scarred by smallpox and her brother had died of it, Lady Mary decided to try this “old wives tale” on her young son. It worked. Shortly after she returned to England, smallpox began ravaging that country as well, so she again used the technique to have her younger child, a daughter, inoculated. As typically happened, her daughter contracted a very mild case of smallpox, after which she was immune.

Because of Lady Mary’s position in Society, this drew some attention—though not from the male doctors of the time, who dismissed it. However, she was able to interest Caroline, Princess of Wales, who began a campaign of sorts to spread the idea. This did have the unfortunate side-effect of “politicizing” the technique, which kept many from taking advantage of it (sound familiar?) but in the end, Lady Mary’s knowledge from the East saved hundreds of thousands, perhaps millions, of lives. That’s especially true when you consider that one of those inoculated included a young boy, Edward Jenner, who went on to develop the world’s first true vaccine—also against smallpox. His breakthrough eventually led to the worldwide eradication of the disease in 1980.

So one woman willing to trust other women, think outside the box, and defy social expectation to try something new made a significant historical difference. I own two different t-shirts bearing one of my very favorite quotes:

In my view, real heroines, whether historical, contemporary or fictional, are the women and girls who inspire the rest of us to follow in their footsteps by bravely treading our own paths despite all obstacles.

You can read or listen to the full NPR article HERE