March is Women’s History Month. Rather than launch into my annual rant about why half of the population get to celebrate their history during a mere one-twelfth of the year (STILL? In 2021? YOU’VE GOT TO BE KIDDING! Oh, wait, I was going to skip the rant, wasn’t I?), I’ll celebrate a few girls and young women who’ve set the bar pretty high for the rest of us, female and male, in this world.

Note: I didn’t want to turn this into a major research project for me, because (1) lazy, (2) I already graduated from school, multiple times, and am not being graded, and (3) I have a book to write. So I’m just telling you a few snippets about six rockin’ role models I admire, because I blog on the 6th day of the month.

I’m currently thanking the heavens that I don’t blog on the 30th!

Bana al-Abed, now 11, started tweeting (as @AlabedBana) at age 7 from inside her besieged city of Aleppo, Syria, with help from her English-speaking mom. She wanted to tell the world what was happening in Syria: air strikes, destruction, hunger, displacement, and her fears of dying. She and her family have now been relocated to Turkey, and she’s published a memoir, Dear World.

Amariyanna (“Mari”) Copeny, aka “Little Miss Flint,” was eight years old when she wrote to President Obama to let him know about the water crisis in Flint, Michigan, and how it was affecting children. She asked to meet with him (or Mrs. Obama), and she received a resounding YES. She remains an activist now at the advanced age of 13.

Anne Frank needs no introduction. She and her Jewish family were forced into hiding from the Nazis in cramped, concealed rooms in Amsterdam for two years during World War II. While in hiding, she scribbled in a diary that was published by her dad (the family’s only survivor after they were found and sent to Jewish concentration camps). Anne’s The Diary of a Young Girl is a life-changer.

Jazz Jennings is now 20, but she became perhaps the youngest publicly documented person to identify as transgender when she spoke about it on TV at age six. (I was on the Casey Jones TV show at age six. It was not similar.) Since then, she’s become a YouTube personality and has had a TLC show and written a children’s book, both titled I Am Jazz. 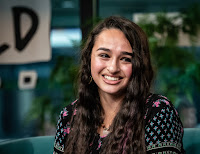 Greta Thunberg, now 18, is a climate-change activist from Stockholm, Sweden. At age 15, she went on strike from her school to shine a spotlight on the need for world action against climate change, and students worldwide have undertaken similar strikes. She’s spoken in front of the United Nations and elsewhere and has bravely (and humorously, via her Twitter account, @GretaThunberg) stood up to those who’ve essentially attacked her for taking on an “adult” cause at a young age.

Malala Yousafzai, now 23, was a 15-year-old in Pakistan when she was shot in the head for speaking out against the Taliban and for encouraging girls to get an education. She survived the assassination attempt and moved to England, where she has continued as an activist while becoming the youngest recipient (at 17) of the Nobel Peace Prize and a graduate of Oxford. Her memoir, I Am Malala, was an international hit. A famous quote by her: "One child, one teacher, one book, one pen can change the world."

Whew! And to think I merely have to write a book today. And, okay, a song.