Hello readers of YA Between the Lines.  I'm so excited to be part of this amazing group of authors.

First a short intro and then on to the topic of the month--character arcs.

I am a NYC-based queer/lesbian Jewish author with a full-time day job.  I've just published my fourth novel, The Papercutter, which is also my first, full length young adult novel.  It is book one of a trilogy that follows three Jewish teens who are part of the first generation to come of age after the United States has split into two countries.

I've written YA short stories here and here, and I loved writing them so much (and also reading many YA books!) that I wanted to focus my own novels in the genre.  My previous three novels are F/F contemporary romances, one of which is New Adult.

The Papercutter has three main characters, each of whom narrates a chapter in rotating order (first person present tense).  There's a lot to deal with in this structure. It was easy in the opening chapters to rotate narration so that each of the three could be introduced to the reader.  But now that I'm writing book two, it's more difficult staying true to the rotation at the same time that I'm moving the plot along and including secondary characters from book one while introducing new secondary characters. This is especially tricky because my overall design is to emphasize the arc of each of the three in one of the books.

Judith Braverman is the title character of The Papercutter.  She is a gifted artist in the craft of papercuts, which has its roots in ancient times when a rabbi's ink froze and he continued writing in Hebrew by cutting the letters into paper.  Here's an example: 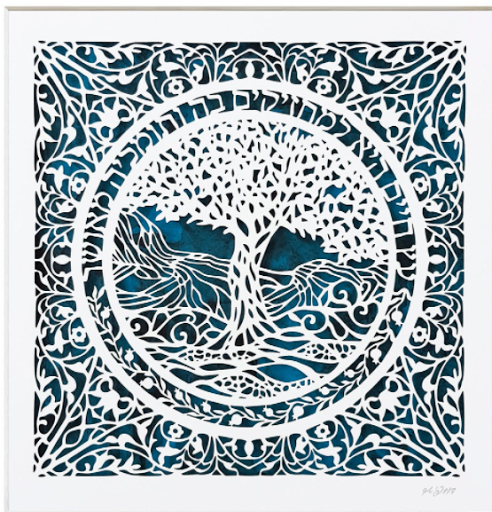 Judith is an Orthodox Jew living in the more conservative of the two new countries. She is comfortable in observing her faith but not certain that she will be able to follow the path laid out by her mother: marry a nice Jewish boy and have many children.  Judith also has the mystical gift of seeing the souls of people that tell her if they are good or evil.

While Judith's arc is still a work in progress by the end of book one, she is definitely in a different place at the start of book two than she was before.  Some of what seemed cloudy and unformed to her before is coming into focus and she is becoming more confident in her abilities and her value.

Dani Fine is the focus of book two, though we meet her and follow her story in book one. Dani is an openly queer, Jewish teenager living in the more politically progressive country. She and her family are secular Jews, except for her older brother who has resettled in the other country and is Orthodox. Dani lives with a low level of anxiety, worried about her brother, unclear if she'll ever find love, and caught between the radical politics of her friends and the more moderate views of her mother. She is also obsessed with the Holocaust and has read every book about it she can lay her hands on. At the end of book one, Dani's anxiety and confusion haven't resolved but she has a new worry added that concerns Judith and our third character Jeffrey.  In book two, Dani's arc will be developed more fully.  The working title for that book is The Border Crosser.

Jeffrey Schwartz is our third narrator.  We meet him early in book one as the cynical, curmudgeon who is eager to leave Orthodox Jewry, defect to the other country and live his authentic life. As a closeted gay teen, Jeffrey is holding onto more than one secret. He copes with own brand of humor and an obsession with Jewish food. Jeffrey's arc is followed closely in book one.  By the end of the novel he has made a critical decision about his life and has become a bit less self-deprecating. Luckily, his focus on food and his biting humor remain.

Jeffrey's arc continues to advance in book two, but he reaches his full potential in the third book.  We get a tiny bit of foreshadowing of what he is capable of in book one when Judith learns the meaning of what she experienced when she saw Jeffrey's soul.

What propels all three character arcs are the external events they experience, as violent acts of antisemitism escalate in the conservative country and government officials begin to isolate Jews from the rest of the country "for their own protection." Judith, Dani and Jeffrey, along with their friends, become agents of resistance, each in their own unique way.

Now that you know what I'm dealing with, you can see how challenging it is to maintain the three-character narration rotation while focusing each book on the arc of one of these characters.  This is especially difficult for me as someone who is not an advance plotter.  The events of these novels come to me as I write. Even when I have some of the big plot points figured out ahead of time, I still can't get to the scene-by-scene and chapter-by-chapter sequences until I'm in the chair with the manuscript in front of me or lying in bed in those moments before sleep takes me.

What I do have is faith. Not exactly the kind that Judith has, but the kind that makes me feel like this will all work out in the end. Call it writer faith: the belief that my three teenagers will make sure that I get them to where they're supposed to be.