Why yes, this is what passes for a New Year's resolution in my world. At least, this year.

The fact that I'm making a resolution at all is sort of a first for me. I don't generally make them because you know, the tendency to set unrealistic goals and set yourself up for disappointment. Also, because when I was a kid, I used to mangle the world resolution as "revolution" and as I grew older, I kind of liked that better. Because revolution implies making a change. So rather than setting a goal, I rather liked the idea of working toward change.

What does Yoda have to do with my New Year's resolution/revolution?

It started, as things tend to these days, on Twitter. The #litresolution hashtag began making the rounds with readers and writers alike stating their literary resolutions for 2011. And I started thinking. Yes, I know this is dangerous. I did it anyway.

I started with the pipe-dream resolutions. You know the ones. Make the New York Times. Get a seven-figure deal. Get on Oprah, never mind that she's finishing her show and that she tends to lean toward the dead white guys for Book Club Picks. It's fun to let those flit in and out of the transom of my mind, but come on, no control over any of that, so why bother?

So I dialed it back a notch.

I would write more. Complete more projects. I'd work to improve my craft.

I mean, not that these aren't worthy goals, but those are always my goals. Those are constants. There was nothing overtly unique about these resolutions. Nothing that would make me want to work that much harder, put forth that extra bit of effort.

So I started thinking back over the past year. Yes there are things I'm obviously proud of—finally seeing STARS published after its unlikely journey being the big one. But the more I thought, the more I realized there was something else, something even bigger, that had slowly but surely started creeping into my writing.

I had two great story ideas occur to me in the past year. I know you're sitting there thinking, "Yes! Great, Barb! Awesome! So what's the prob?"

There really shouldn't have been a problem after all. The ideas are really, really fantastic. I'm excited by them. Except...

They're so totally not what I write. I mean, really so far out of my comfort zone, they needed a whole new zip code. So while the ideas were exciting, they were also scary. At first, they were scary in that exciting sort of way, but Virgo that I am, I started thinking and analyzing and thinking some more and that led to the internal debates that turned into internal arguments, all of it fueled by—you guessed it—fear.

Boy did that piss me off. Realizing just how much fear had hobbled me in the past year.

If you haven't guessed it by now, this is where Yoda enters the picture. Because when I started thinking about what changes I wanted to make for 2011, what goals I wanted to set for myself, I realized what I most wanted to do was to eradicate that fear. And who better to help with that than a 900 year-old Jedi Master? And that's when it came to me. I knew what my #litresolution was going to be.

Okay, I thought it was clever—and very appropriate for me because, you know, The Empire Strikes Back is a truly awesome film and really, there are a lot of great life lessons in it (plus Han Solo embracing his role as the hero-- le swoon). What shocked me was how often it was retweeted. Clearly, there was something in what I said that resonated with more than a few people. Which is lovely and believe me, I'm flattered, but honestly, the most important is that it resonated with me.

The best part of all of this? My husband. Because he gets it and most importantly, he gets me. So yesterday, on New Year's Eve, UPS delivered a package, a surprise courtesy of my wonderful husband. 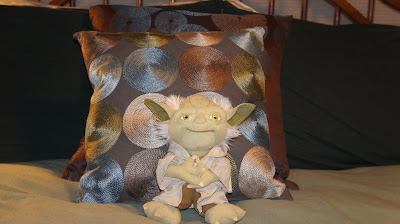 Yes, he talks. And he says the most important words of all: "Do. Or do not. There is no try."

So I have no excuses. Nothing to hide behind. This is the year where I don't just confront my fear, I disregard it for the limitation that it is.

After all, I've got my very own Jedi Master holding me accountable.

May all of you have a wonderful, inspiring start to the new year and may 2011 bring with it wonderful things.