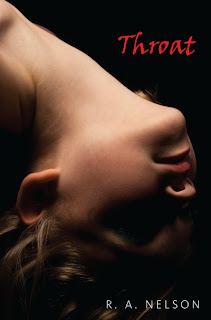 So what’s the big news?

My fourth novel, THROAT, a book about a girl whose epilepsy transforms her into a vampire that doesn’t need to drink blood or fear the sunlight, is now on sale everywhere!

How did you approach the writing of THROAT?

I never set out to write a vampire book, but once I realized that’s just what I was doing, in the true spirit of 'writing outside the lines,' I did my best to make this the most realistic vampire story I possibly could. I stepped back and looked at the whole thing with fresh eyes, asking myself the question, “What would it REALLY be like to be a vampire?” Basically you would be super powerful, but also homeless and desperately dependent upon the very people who would hunt you down and kill you if they could. Why homeless? How could a vampire own property when he couldn’t even have a social security number? Could never transact business during daylight (banking) hours? Would need to stay on the move to avoid detection? Had no address, no telephone, or even contact information? Yes, there would be amazing physical and sensory advantages, but also crippling weaknesses and obstacles. Being a vampire would most definitely be a curse. There would be very little that was glamorous about it. Sexy? Well...wait, I don't want to spoil it for you.

So what else makes THROAT so completely different from the eight million other vampire novels?

My main character, Emma Cooper, already feels cursed. She is an epileptic who suffers from tonic-clonic (grand mal) seizures that have seriously disrupted her life in many ways. Her social world has been wrecked, she has lost friends, and hasn’t even been able to get her driver’s license. At heart Emma is adventurous and daring, and so is furious that her condition has shackled her dreams. Don’t even mention boys. This has all left her bitter and a loner. But in a strange twist of fate, her epilepsy also saves her life one terrible night when she experiences a massive seizure while being attacked by a monster named Wirtz. Emma’s seizure also scrambles her transformation: afterward she has all the powers of a vampire but none of the weaknesses. Life should be great – there’s just one catch. Other vampires are coming to kill her for it.

So this is an action story? All adventure and no romance?

Heck no! There’s plenty of action, sure. Emma is menaced from one end of the book to the other. THROAT is a breakneck survival story. But anyone who has read my books knows I really enjoy a great love story, and the centerpiece of THROAT is a tale of love and wrenching change. When Emma is forced to take refuge at a NASA Space Center and meets a guy who works there as a university co-op student, she has to learn how to trust all over again in order to stay alive, discovering she can’t do everything herself, even though their blossoming love puts them both in horrific danger.

So is there a THROAT 2 in your future?

I really loved writing this book, but I wrote THROAT as a stand-alone novel with a VERY definite ending that was a blast to create (and also harrowing even as I wrote it). But there are several possibilities remaining for future story lines.

Can you tell us what you are working on right now?

That's a secret! But I can tell you this: it will be COMPLETELY out of left field. Fresh, different, crazily new. Thanks for asking!
Posted by R.A. Nelson at 10:02 AM