What an appropriate time for us to be talking inspiration because last week I needed it more than ever. I've working on the project I've been calling The Bartender Book, which as I mentioned on my last post here, I was giving one last shot while I was on my writing retreat to San Diego. That writing retreat went beautifully, reviving and inspiring me and putting me in great writing spirits. I had lots of revelations about my writing in general and thought I had a great grasp on this book in particular. You can get all the details plus more pictures of Sunny San Diego here on my blog. 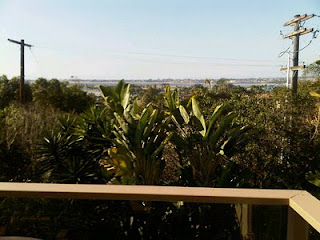 Those sunny days and good vibes kept me going for a month. Then on Monday night, I realized that A. my book is too long and B. that one of my characters had done something that I wasn't sure if the other characters or me or my readers could ever forgive her for. I mean she had been doing it all along and in fact the plot revolves around what she'd done. But suddenly it seemed like I couldn't find any way to justify her actions or resolve them in a way that would lead to a satisfying ending. I'd broke the book! Again! And this time since it dealt with something so intrinsic to the plot, it didn't seem like I could fix it. It seemed like the book was officially dead. And I was beyond upset, I was in mourning. Now I've gotten frustrated with this book many times and kept saying I was through with it, but those times I was so annoyed with it and the writing had been going so poorly for so long, the idea of giving up felt like a relief. This time, since I'd totally fallen in love with my characters and was really enjoying writing again, it was freakin' devastating. Like I don't know how I'll ever write again devastating.
So what's a girl to do?
First I busted out the playlist for the book. This book has my longest playlist yet. It's currently at 34 songs. I keep discovering more. The main bands for this book as I know I've mentioned before are The Gaslight Anthem, The Loved Ones, Hole's Nobody's Daughter album, Against Me!, a long with a little bit of The Cure, Siouxsie Sioux and Bruce Springsteen. I just added some songs from Social Distortion's brand new album. In particular a song called "Writing On The Wall" speaks to the end of the book right around the part where I got stuck:

So I busted out the iPod dock, brought it into the bathroom and sat in the bathtub for over an hour, hoping for inspiration to strike.

Then I cooked dinner listening to that same playlist.

Then I sat down to catch up on One Life to Life (soap operas are an inspiration for this book).

Then my husband came home and I proceeded to tell him that it was over. The book was dead. He tried to console me and talk plot with me a bit (my husband is a saint, I swear), but I was far too morose and braindead at that point. So I decided we should watch Spike Lee's When The Levees Broke, which is about Hurricane Katrina.
I'd gotten it from Netflix because one of my characters has really profound emotional reaction to Hurricane Katrina.... Well, I mean, who didn't. Personally I was glued to CNN for days when it happened. I was in grad school at the time and working day shifts at the bar. One of the curmudgeonly old guys really pissed me off when he said something along the lines of young people like you don't care about this. I totally went off on him and talked about friends who were planning trips down to rebuild and donating as much as we could to the Red Cross, etc. Then as writers do, I stored up the experience.
Both of my books, I WANNA BE YOUR JOEY RAMONE and BALLADS OF SUBURBIA are about figuring out your home/who your family is. It's a huge theme in my work, finding your place in the world, finding the people that are good to have in your life because it is something I always struggled with. Watching people lose their homes, watching them flee a city that so many of them had had family in for generations really disturbed me. And for my character who has been moved 12 times by the age of 14, the last move taking place while Hurricane Katrina is hitting.... like I said, profound effect.
So I'd wanted to watch the documentary to remember my own feelings so I could write hers. Of course when we sat down to watch it, I thought I was giving up on the book, but I figured at the very least it would remind me that there was something much huger out there than me and my problems. Even if I have to scrap the novel I've been working on for a year, it is nothing compared to what those Hurricane Katrina survivors went through.
It's a very powerful documentary. I cried through a lot of it. And I still held on to the determination to finish my book. I woke up after far too little sleep feeling like I didn't have any answers though, but as I lay awake in the darkness, I start to formulate some. I'm still taking baby steps to get on track and crossing my fingers and all that other good stuff that I'll be done before my own trip to New Orleans on March 20th. I can't say exactly how the documentary helped me, but it's really powerful and just a reminder of how strong people are. As much as music and being in a good place feed my muse. Life, both good and bad events, are always the main inspiration. Here is a clip from the very beginning of the documentary, but I highly advise you to rent the whole thing.