Fighting can be fun

One of our lovely readers asks: "Do you find yourself avoiding conflict in your books?"
The answer is a big “Of course!”
First of all, I avoid conflict in real life. I don’t like to fight with my husband. I don’t want to ask my teenager a question if I know I’m not going to like the answer.  If I’m downtown and see some crazy guy walking my way, I’ll cross the street long before we cross paths.
Avoiding conflict is easy. But it doesn’t make for very good writing.
And when you write mysteries and thrillers like I do, you have to have conflict. At the end of the book, you have to have that moment when the good guy confronts the bad guy - and wins.  (But winning should not feel like a sure thing.)
Fighting is good - on paper
Recently, I was writing a scene where a cop asks someone to leave town for his own safety.  And, according to my outline, the character was going to agree.
But he didn’t. He simply refused to. He was insulted that the cop asked him to run and hide.
The conflict that resulted not only made the story more believable, it also made it more interesting. Their argument let the reader think about both sides of the issue.
Ways to add conflict
* No chit-chat. Dialog should never be ho-hum. Whenever possible, set two speakers against each other – clash of personalities, a struggle over status, competing egos, lies, etc.
* Write scenes that personally make your palms sweat. Don’t stack the odds in your character's favor. Multiply the bad things he faces - and see what he does in response. You’ll find that when his - and your - back is against the wall, he’s even more clever than you thought.

* Conflict doesn’t have to always be between two people.  It can also be between a character and his environment. So play on universal fears by adding one or more of the following to your scene: darkness, bad weather, something crawling on the skin, objects that cover other objects, being alone, being helpless or unable to act, something under the bed, closed or partially opened doors, hallways or tunnels that lead to the unknown, cramped spaces, basements, attics, heights, crowds, or disease.
* Give your characters phobias or fears - and then make them face those fears. Afraid of heights? The final confrontation should take place on a rooftop. Afraid of repeating the same mistake? Give your character the opportunity to get it right.
* Hurt a main character. Do it early so the reader knows no one is off limits. It also helps to make one character especially violent.
* Even better, kill somebody off – preferably a likable character. Readers will be on the edge of their seats, knowing that anything at all - even something very bad - could happen.  (This works so well in Game of Thrones.You can never rest easy, thinking George RR Martin will never kill someone off, that he’s too central to the story - because next thing you know, the guy has his head on a pike.)
Fighting is fun - in real life
Like I said, I’m afraid of any kind of confrontation.  I can’t even bear to listen to talk radio, because the people are always yelling. 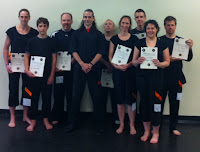 But like that metaphorical frog that doesn’t realize it’s slowly being boiled, I’ve somehow accidentally become involved in martial arts. I took a kickboxing class and along the way it somehow morphed into a kajukenbo class. Until the beginning of June, my sole purpose in that class was to make everyone else feel like they were better at sparring. I would get frightened and cower when people throw kicks and punches at me. (When we first started doing it, I had to resist the urge to run away, crying.)

In other words, I totally avoided conflict.
When they saw that I was getting freaked out, some of my classmates would back off and take it easy on me. But not this one 14 year old whom I call Devil Child. Devil Child will happily bruise me. His windmilling arms rain down blows, and he has a mean spinning kick and an even meaner chicken kick.
So this summer, I’ve learned to embrace conflict. Instead of stepping backward when Devil Child comes at me, more often than not I now move forward and keep throwing punches.
And I’ve even seen him flinch.
Which is sweet. 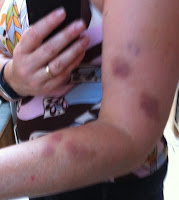 And now I can do it with all our other classmates. I’ve got the bruises to prove it.
But this class is teaching me that sometimes conflict is fun.