I grew up having summer vacations that stretched from late June through early September, and those were some of the best and most important seasons in my life. I nurture a not-so-secret hope that we won't make all kids go to year-round school, that they'll get to experience summer vacations, too. And I realize that summer vacation doesn't mean the same thing to everyone, but these were mine:

Early summer had a timelessness to it, a relaxed feeling. Along with the freedom of being released from my school schedule (which required me to get up at the barbaric hour of 5:45 AM), there was the casualness of going barefoot, wearing shorts or swimsuits, relaxing outdoors. As we get older, our lives get increasingly crowded and hectic. Summer back then meant free time: more than enough. Sometimes I would even get bored, and have to figure out how to entertain myself. Boredom is a luxury, and it taught me how to take charge of my own schedule and learn how to fill it.

Summer was when I got to read more than ever: armfuls of books lugged home from the library. I played in the yard more often, inventing my own stories for my sister and myself to act out. (A story-teller is born!) It's when I made my first attempts at writing books. 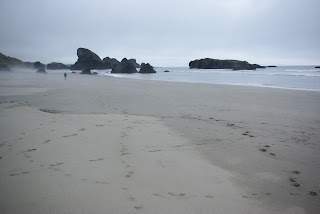 Summer was melting ice cream, hot pavement, the whirring blades of an electric fan. It was standing in the frozen-foods aisle at the supermarket or going to the movies for temporary relief. It was lying in the grass with a new library book. It was the pungent chlorine of my uncle's pool, and wrinkled fingertips from staying in the water too long. It was barbecue smoke and sweating pitchers of iced tea, and the clop-clopping of flipflops. It was a day at the beach, the salty taste of sea spray, the cry of gulls, and the feel of powdery sand underfoot.

What did summer vacation mean to you?

Posted by Jennifer R. Hubbard at 7:00 AM