—Hillary Clinton’s response when asked about her favorite clothing designer. Priceless. (Although this is a 2010 event, it’s only just hit the web recently.)
MODERATOR 1: OK. Which designers do you prefer?
CLINTON: What designers of clothes?
MODERATOR 1: Yes.
CLINTON: Would you ever ask a man that question? (Laughter.) (Applause.)
MODERATOR 1: Probably not. Probably not. (Applause.)
http://www.thehollywoodgossip.com/2012/08/hillary-clinton-dresses-down-moderator-over-fashion-question/

—The combination of dark chocolate and sea salt. Who knew?

—THE SWEET DEAD LIFE galley (by our own Joy Preble) that I scored at BEA (getting to hang with Joy was an added bonus). Loving it. My kind of protag: smart and sassy. Look for it in May 2013.

—Jodie Foster’s essay for the Daily Beast defending Kristen Stewart, blasting fickle fans, and questioning the dark side of the media’s fixation with young celebrities.
Foster: “I’ve said it before and I will say it again: if I were a young actor today I would quit before I started. If I had to grow up in this media culture, I don’t think I could survive it emotionally. I would only hope that someone who loved me, really loved me, would put their arm around me and lead me away to safety.”
http://www.thedailybeast.com/articles/2012/08/15/jodie-foster-blasts-kristen-stewart-robert-pattinson-break-up-spectacle.html

—And, finally, the many variations of Ryan Gosling’s “Hey, Girl” meme dedicated to librarians and other bookish types. http://librarianheygirl.tumblr.com/ has an excellent collection. Sigh. Snicker. 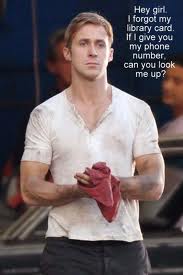 So what did I miss? What's on your list?
Posted by Wendy Delsol at 1:29 PM