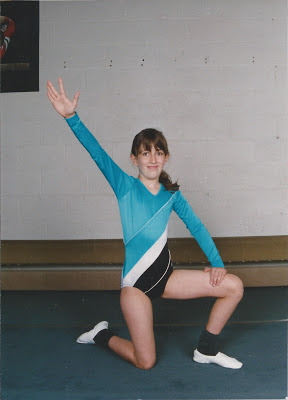 That's me in sixth grade on the gymnastics team. I wasn't Gabby Douglas or anything. Not even close. I got about as far as back walkovers and I could do them on the beam, which was pretty sweet, but I didn't advance beyond that. I could also do the splits, both sides and the middle.... well, almost the middle.

I can't do that anymore, but thanks to Pilates I'm still decently flexible even in my thirties. Physically that is... When it comes to my writing routine, flexibility is something I've really had to work on... Again and again and again.

I'm a perfectionist, a list-maker, and a planner. I love having goals to strive for and a routine. I can be a bit of a control freak at times (okay, a big control freak sometimes.) To a degree this is a good thing. Organization helps me juggle my busy life of way too many jobs. Being goal-oriented and driven is what has kept me writing, always determined to beat my personal best.

But it also can handicap me. I get frustrated when the words don't flow like I think they should, so frustrated that it blocks me. And, ever since I quit my office job to try to string together other jobs (bartending, teaching, and freelancing writing) to have more writing time, I've been in search of the perfect routine. Because it has to be there, right? And I have to find it. Routine is what makes people the most productive. Write every day is advice I've been given over and over again.

So I determined that writing in mornings, starting first thing before email and other tasks, is what makes me the most productive. And then I read an article about how people are most productive in 90 minute chunks, so I created #90minWrite because I always felt bad because I could never seem to write fast enough to do #1k1hr sprints like other writers. I'd convinced myself that writing fast doesn't work for me because I'd written fast through a draft of my Bartender Book and I'd completely gone off the rails, had to rip out an entire subplot and rewrite it. I also decided at some point that I had to write books in order. I'm not sure why. My first book, I WANNA BE YOUR JOEY RAMONE, was totally non-linear. I wrote it by the seat of my pants and had fun... until I got stuck. Clearly going in order and plotting some would prevent that disaster. But not plotting too much because I plotted my Modern Myth YA so much that I completely lost interest in writing it halfway through. Oh, also I have to have goals and personal deadlines because I need those, right? Otherwise I'll procrastinate.

Is your head spinning from all the rules I created for myself? Mine certainly was. It completely shut me down for a while last year because I felt like a failure who couldn't keep to her goals, who couldn't write fast enough, who totally fucked up if she wrote too fast, who could never keep to her routine and when she got off track on Monday morning, it meant the rest of the week was totally lost to her.

Then, as I mentioned here a couple of months ago, I took my writing (well, and myself) to therapy and one of my therapist's key points was that I need to focus on ritual not rigidity. Okay, so I work best in the mornings. When I can do that, awesome. When I can't, taking a deep breath and brewing a cup of tea can help me get into the zone. Sure, writing in 90 minute chunks works best for me, but sometimes if I only have half an hour, I can still use it or if I can take a whole day like I used to do when I was in school, awesome.

Another thing I've had to be more flexible (and realistic!) about is my goals. I beat myself up when I set big goals for myself that I don't meet, even though, the thing is, I have met deadlines before. I'm totally capable of it. Putting unnecessary pressure on myself is pointless because I know when I'm procrastinating versus when I'm doing the necessary daydreaming part of the writing process.

I've been preaching to my students forever that every book is different. You  might write one in order and another non-linearly. One might need a lot of plotting, another might not. While sure, I generally tend to get stuck around the 3/4th point of every book, what I need to do to move forward is different every time and just because writing fast was a disaster once, doesn't mean it will be this time. Also, every writing day is different and new.

Part of flexibility is trusting yourself as a writer, which is definitely scary to me, but I'm trying my best. I've been working on this Contemporary YA since August. I allowed myself to speed write around the tough part and have been speed writing for most of this year in the hopes that I'd have a rough draft completed like now. I kept telling myself that even though I knew there was a lot to go back and fix at the beginning and in the middle, I had to keep pushing forward (because that's another rule that every one tells you and I've broken it a lot and ended up slowing myself down on occasion). I also felt like it would be really satisfying to say, hey I have a complete draft. But for the last week or so, I was really just writing crap in order to write. I wasn't seeing the scene or the story. I had a vague idea of the events but I really did need to go back to the beginning and flesh out certain sections and get to know my characters better to be able to round those ideas out. (I should mention I took about 6 weeks off at the end of last year because my cat died and I was dealing with all kinds of life stress, but instead of going back to the beginning then, I pushed ahead.) Finally, last Wednesday I said, you know what, be flexible, trust yourself and do what this book needs, which is not for you to rush forward and write "The End," but to go back and figure out how to get there.

Though I didn't the satisfaction of writing "The End," I definitely feel better when I set down to write (or rewrite as the case is now) these days. I'm still a little nervous about this choice, but I'm trying to trust myself and strive for this kind of flexibility: 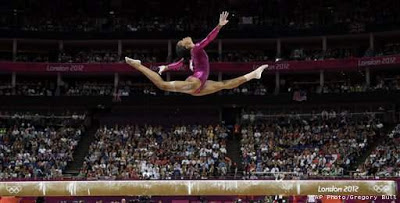 What about you? Are you a flexible writer? What things are you doing to try to be?
Posted by Stephanie Kuehnert at 9:00 AM