I Hail the Power of a Crappy Little Notebook (Jennifer Castle)

In September of my sophomore year at college, I bought a 99-cent marbled composition book, opened to the first page, and started writing about the boy who had just broken my heart.

This felt good. So I kept doing it, every few days, intent on keeping a real record. Of the things I experienced daily and the people I shared them with, and my feelings about it all. GAH. So. Many. Damn. Feelings. The widest range of emotions anyone could possibly fit between thin blue lines on a white piece of paper. In one way or another, every entry was an attempt to answer these irritating-as-hell questions: Who am I, anyway? What makes me happy? How can I get to that place?

I gave myself journaling rules, like I had to keep my pen moving and not think too much, fill up an entire page before stopping, and give each entry a title. When one book was done, I bought another. These volumes carried me through the highlights of my college years: my first serious relationship, a crippling depression, the pain of shifting friendships, and eventually, an all-consuming infatuation that made me re-examine the nature of love itself. (Curious about that one? Good. I’m about to start writing a novel about it.)


I graduated, and the journals scrawled on. The post-college editions are marked with all the greatest hits of new adulthood: living in a strange city, dating and boyfriends, jobs and bosses and once again, always, those Big Questions. It wasn’t until I got married that my journaling began to trail off. Instead of a few days between entries, there would be a few weeks, and then months or more. By this time, I’d been journaling for over 18 years. I guess I no longer felt the need for so much recording and examination. Every time I felt or experienced something, I knew I’d been through it before on some level. Whenever the Questions asked themselves, I felt like maybe, just maybe, I had some of the answers. In other words, I’d grown up.

Lifethings still get knotted up, every once (or twice) in a while. The page is always where I can untangle them...then move on.

In early 2011, I had a situation. I’d just spent six years writing my debut novel, “The Beginning of After” -- six years to develop Laurel, the main character and narrator, six years of writing in her voice and feeling her, of her being real to me. Now it was time to start working on my second book, “You Look Different in Real Life.” I had to create a fresh protagonist, and I couldn’t take six years to do it. After all this time, had Laurel become my “default” writing voice? Was this new person going to sound any different? Who is she? What makes her happy? And how can she get to that place?

I responded the only way I knew how: I went to the drugstore and bought myself another composition book -- this one with a cute design that seemed like it would appeal to Justine, my new character. And I started journaling again.

But this time, I journaled not as myself but as Justine. I began with something ordinary that popped into my head, Justine talking about hanging out at a cafe after school with her best friend. I went from there, following my customary rules: I kept my hand moving and my brain unthinking, I had to fill up a page before stopping, I titled my entries. Line by line, entry by entry, Justine took root. 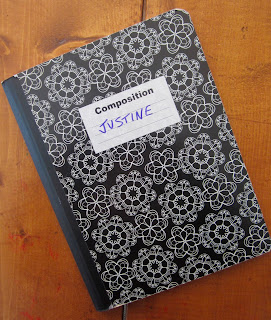 Because it’s springtime and I love me a seasonal metaphor, I’ll say that she sprouted in the pages of that journal. When I knew she’d grown enough so that I could re-pot her into the story itself, it was time to start writing the first draft. Of course, like all characters, she continued to evolve during the drafting and revision processes. Even now, with the book done and ready to jump into the hands of readers, I feel as if Justine’s still out there, growing some more.

Just like me.
Email Post
Labels: character development Jennifer Castle journaling The Beginning of After You Look Different in Real Life