Standing in a Cow Pasture in Amarillo, Texas-Jen Doktorski 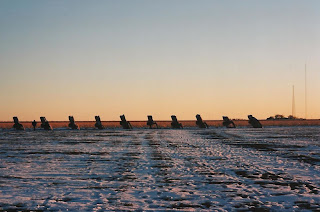 Ever since she was three, we’ve been charting my daughter’s growth on the doorframe of her bedroom closet. Tiny marks etched into the wood; a date beside each. The big jumps from one pencil mark to the next always surprise us both. We don’t see physical growth while it’s happening, but at least it’s easy to quantify.


As we get older, intellectual, spiritual, or emotional growth can’t really be measured precisely. We can’t stand straight with a book or ruler on our heads while someone draws a line on the wall behind us. Often, we don’t even think about whether or not we’ve made some tiny step or big leap forward in any of those areas unless something prompts us to do so.


I think that’s why I’ve always loved road trips so much. Whether it’s a four-hour car ride home from college or a trek across Canada, there’s something about being on the road, away from regular life, that makes you stop and think about where you are.


When I was in my twenties, I took a cross-country road trip with a guy named Kenny. He was a friend of a friend and I didn’t know his last name until a few days before our trip, but he was willing to travel west with me and fly home. I was going stay on near Phoenix for a few months and live with my college friend. I was at the proverbial crossroads, contemplating my next life move and thinking about making Arizona part of the plan.
The route we took from New Jersey to the west coast was similar to the one traveled by the characters in my debut novel HOW MY SUMMER WENT UP IN FLAMES. Unlike my characters, I didn't have a very detailed itinerary. Aside from visiting friends in Pennsylvania, Texas, and California, the only other stop I wanted to make was at Cadillac Ranch in Amarillo, Texas. I saw it in a travel book and thought it looked like a road-trippy kind of place stop. Located in a cow pasture off Interstate 40 in Amarillo, Texas, Cadillac Ranch is a public art installation consisting of ten Cadillacs buried nose-first in the ground. Visitors are allowed to spray-paint or write graffiti on the half-buried cars. I didn’t. But Rosie, the main character in my novel did. She wrote “Why?” Maybe because that’s what I had been thinking years ago when I stopped there on that cold January day. At that point in the trip, Rosie and I were both trying to figure out where we were going next. And just like Rosie, I couldn’t see at the time all the ways that road trip had already transformed me.
Sometimes we need distance to recognize our moments of growth, and sometimes it is the very thing that sparks them.
Email Post