You learn how to do it just by doing it

When my dad was dying, one of the last things he said to me was, "You learn how to do it just by doing it."

You might not think that idea has much to do with our theme this month, which is about spring and growth.

Dad learned how to do a lot of things just by doing it. He got into radio when he was just 16, and then was a TV broadcaster back when TV was new.  He didn't get married until he was 31, didn't have kids until he was 36.  He became a politician in his 60s.

To be honest, I hardly ever want to grow.  I'm generally pretty happy with the status quo.  Growth usually involves some kind of pain, even if it's all in my head.

When my daughter was a little baby, I felt like a fake.  Like a bad actress pretending to be a parent.  I felt everyone else knew intuitively what to do from the very beginning.  No they didn't.  It's just that some had experience and some didn't.

Years ago I went to New York on vacation by myself.  Before I left, I was seized by fear. What if I got lost? (This was in the days before everyone had GoogleMaps in their pockets.) What if I was mugged or raped or ...  If I could have gotten my money back, I would have cancelled my trip.

I had a wonderful time, even though I was so young and inexperienced that on the airplane I wore the earphones the stewardess gave me so that the cord ran over the top of my head, not under my chin.

In the middle of this month, I'm going to Texas for a week of school visits and to speak at the International Reading Association conference.  I'm going to rent a car, something I've only done once before in my life (I usually let my husband drive so I can read) and drive places I've never been. I've never filled my own gas tank (you can't in Oregon - I think the same might be true in New Jersey).  By the end of the week, I'll have spoken to thousands of people.

I'll learn how to do it just by doing it.

When I started kung fu, I would have to talk myself into walking in the door.  All these guys, many of them bigger than me, most of them faster, and all of them better.  Now I go five to six times a week.

Over the years, I've learned the answers to these questions (and they're just my answers, not yours). I have a deadline looming over me, but since this is something like the 20-plus book I've written, I know I can do it.  Because I have done it.

So much to be afraid of.  But the only way I can learn to do it is by doing it.  And that's the key to growing.

Dad was right. (That's him on the right.) 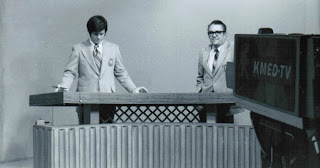