November by the Numbers--Ellen Jensen Abbott


To kick off my debut on YA Outside the Lines and to celebrate the launch of my new book, The Keeper, I am giving away a Kindle Paperwhite and all three books in my series, the Watersmeet Trilogy (Watersmeet, The Centaur’s Daughter, The Keeper). You can enter to win by commenting here or following me on Facebook or Twitter. See the Rafflecopter at the end of the post.
The November prompt for YA Outside the Lines was to reflect on what you had to get done this month, whether or not that included NaNoWriMo. But here I am on the last day of the month, so it seems that a “month in review” ala the Harper’s Index in is order:

Number of People served Thanksgiving Dinner
at the Abbott household:
23 (full disclosure: one was an infant)

Number of pounds of turkey carved:
32

Number of doctors’ appointments for the Abbott family:
9

Of course, it’s this last number that dominated my month. My third book, The Keeper—the final installment in the Watersmeet Trilogy—was released on November 5. Since I’m new to YA Outside the Lines, I’ll give you a quick synopsis: In the Watersmeet Trilogy, readers follow the outcast Abisina as she leaves her village to search for her father and for acceptance. On her journey, she discovers the whole land of Seldara: the dwarves of the Obrun Mountains; the fauns of the western forests; the centaurs of Giant’s Cairn—some friends, some foes. When she reaches Watersmeet, she thinks she’s found the home of her dreams where all of Seldara’s folk are welcome, but soon Watersmeet’s existence is at risk and Abisina finds herself outcast again. Can she save the home she loves? Can she unite the land against a gathering evil? Can she embrace her destiny and become the Keeper of Watersmeet?

A book launch is supposed to be glorious, but writers, insecure by nature, find plenty to sweat about. And here again, there are numbers that can tell the story. With the launch of a book, I begin to wonder what my Amazon rank will be, how many bookstores, libraries, and schools will want my book on their shelves, if I will earn back my advance, how many people who bought my first book will come back to buy my second or third.

Lots of writers, on publishing their first book, worry that there will not be a second. The same is true for a series. What if you really only have one story to tell? All the dreams that you have wrapped up in your book pre-publication—Will I remember to thank all the right people in my Newbery speech?—and the nightmares—Remaindered after one month on the shelves!—are now going to be tested. It’s enough to make this writer want to stick her head in the sand and let her agent read her reviews!

But there is one element of the book launch which makes all of these other numbers meaningless. It just takes one reader—touched by your story, engaged in the world you built, rooting for your characters and loathing your villains—to make this day as glorious as you want it to be. Lucky for me—and thanks to social media—I know who that ONE READER is. Here’s the photo and the caption his mother shared with me the evening of my launch party: 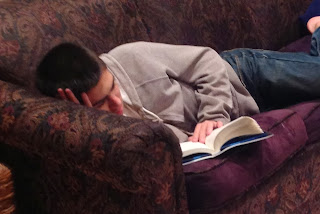 “I had to get him out of my hair, so I handed him your book...1.5 hours ago.”
It’s really this simple, one-to-one relationship that writing is all about. It’s hard to ignore all the other statistics that are used to weigh the success of a book, but for now, I like the number one.

a Rafflecopter giveaway
Posted by Ellen Jensen Abbott at 7:00 AM