It's been a tough year writing wise. I'm trying to find a new agent, and I keep getting encouraging rejections saying the agents love my writing (based on sample pages) and to please think of them in the future, but the market is not great for the book I wrote so they're going to pass. Here's the thing. I don't write to trends. I just write what I love and hope someone wants it. Unfortunately, this time, the book I wrote is dystopian. According to numerous blogs and publishing info, dystopian is dead, buried, makes editors want to throw up or curl into a fetal position (I really read this). My hope was that someone would say, “You're an awesome writer, and I don't think I can sell this now, but you have potential so let's make this work.” I know. I know. That's a tall order, but I know people this has happened to, so a girl can dream.

Speaking of dreams. The writing one has always been mine. I have two YA contemps published, but they were FAR, FAR from best sellers, although they did get really good reviews. So that's two strikes, right? Books that didn't do great and a new one that's so scary in this current publishing climate, it makes people want to run away.

I was down for awhile about this and thinking about what I can do. I have ideas like reworking my pitch to highlight the other elements of the book (I feel it's more political than dystopian, but clearly I did not represent this in the query) and moving some things around in the opening pages. I also decided not to give up. Another thing I decided to do is go back to the contemp book I started last year but put aside in favor of the dystop. I will also continue to put my all into the other contracted projects I have—books I am excited about and thankful to have the opportunity to write.

And, above all, I decided to be positive. This is not easy when anxiety and such pull at me, and when it's so much easier to wallow. But positive energy brings positivity. I truly believe this. Besides, letting myself fall prey to negativity and feelings of failure don't help. They don't create a book that will sell. They don't conjure an agent. All they do is make me feel worse.

I'll tell you something else. Making the conscious decision to feel positive and go about life looking at stuff in that light, has made me feel a lot better. It makes me feel like things are possible, like if I put my mind to finishing the contemp, to reworking the dystop, to working on my other projects, good things will come. 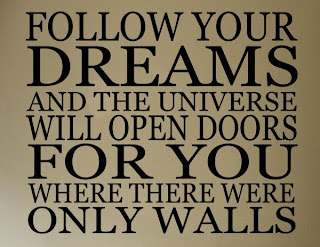 I have a six-year-old son who knows his mommy is a writer, who knows that's what I have always loved to do. I don't want him seeing me giving up. I want him to grow up thinking it's ok to feel sad and want more, but to then keep going. To keep striving. Even when it takes all you have to do so.

So that's what I'm celebrating. Positivity. Determination. The decision to keep chasing my dream, until it's in my grasp again.
Email Post