But should I really expose others to my celebrating?

Last week I finished my novel, the one I've been working on for two years. The one I sometimes shoved aside in despair. But now it's finished and I am happy with the story. YAY!!!

Re-reading the last paragraph of my novel (YAY!!!) coincided with the end of the school day. I'd already received one text from my 8th grader: Are U coming? It's freezing.

So I slipped my fuzzy-socked feet into my Danskos and jumped into the car. Hair not washed, but I found some sort of hat lying on my un-vacuumed floor. I'd been wearing the same sweatpants for, um, awhile. And my top half was covered in a mismatching sweatshirt. 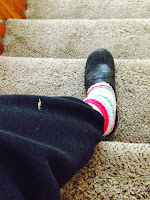 Okay, so I have to admit that I often drive carpool looking like this. I think it's good for 8th grade fashionistas to have a role model of a different sort (although they probably just shudder in horror & swear they'll never stoop so low).

I announced that I'd finished my novel. YAY!!!

After we dropped off our carpool, my daughter begged me to go get cupcakes so we could celebrate. I demurred. "I'm wearing fuzzy socks with Danksos and there's dog drool on my sweatpants." She was not fazed (she likes cupcakes as much as I do). And, really, I do try to emphasize that appearance doesn't matter, so I hauled my bedraggled self into the cute blue and white cupcake shop and picked out four much-cuter celebratory cupcakes. YAY!!!!

Sometimes celebrating doesn't look good, but it always tastes, I mean, feels good. Now that finished novel is in my daughter's room being read for the very first, all the way finished, time. Remember-- appearances don't matter.