Falling in love with an Oregon author 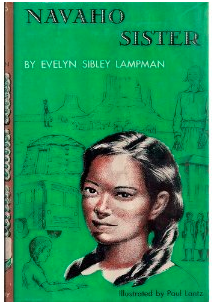 Growing up, I fell in love with the books of Evelyn Sibley Lampman. I still vividly remember finishing her book Navaho Sister and then turning back to the first page and starting again.  I just could not bring myself to leave the world of the book.

Born in 1907, Evelyn was ahead of her time in more ways than one.  She was a writer for a radio station until she married a newspaperman. After he died, she cut his suits down to fit her and went back to work. It's said that she was Portland's first white-collar woman to wear pants to work. Eventually she became educational director for a radio station which broadcast six dramatized in-school listening programs a week. Great training for being a writer.

One day her fourth grade daughter complained that she had read everything in the school library. She suggested that Evelyn write a book. And she did. Crazy Creek is about a girl who travels in time and ends up living with her own family several generations earlier. She kept writing books, and she eventually quit her job and wrote full time.

Like Navaho Sister, a lot of her books feature Native American characters.  Evelyn grew up in a small town that held KKK rallies on Main Street as late as 1937.  But her father, a judge and lawyer, taught her to respect the local Native Americans, whom he felt had been unfairly treated.

Another book of hers I remember well is City Under the Back Steps, about kids who are shrunk down to the size of ants - in fact, they end up captives of the ants.

Lampman always dealt sympathetically with people (and even creatures) who were outsiders.  Her later books included more Native American characters, as well as migrant workers and unwed mothers.

Last week, I got an email from a young girl.  She wrote, "I  am 13 years old and in 7th grade. I am in love with your stories. I have just finished reading "The Night She Disappeared" for the 5th time."

When I read that, I saw myself in that girl.
Email Post