The scene I remember the most took place in Rome. Katy Carr has traveled there as the companion of Mrs. Ashe, a widow, and her young daughter Amy. Amy is fighting for her life, a victim of Roman fever. The proprietor of the pension where Katy, Mrs. Ashe and Amy are living threatens to kick them out because word of the fever is hurting her business. Mrs. Ashe is undone by her daughter’s illness so Katy steps forward and argues with the domineering landlord, insisting that the landlord is being inhuman, and that they will not  move—all in her limited French. Standing in the background is the dashing Lt. Ned Worthington, Mrs. Ashe’s brother, and he’s transfixed.

What’s not to love about this scene from Susan Coolidge’s What Katy Did Next? Katy is powerful and courageous, and the love interest falls for her because of her strength, abandoning his crush on the beautiful but shallow Lily Page for power and passion. It still gives me goose bumps!

As a writer, I am often asked which books most influenced me. Because I write fantasy, I usually talk about The Voyage of the Dawn Treader, my favorite of the Chronicles of Narnia (all of which I adore). But there is another group of books that influences me perhaps as much. I call them the “strong female character with a hint of romance” books. Think Anne of the Island (the third of the Anne of Green Gables series) or Laura Ingalls Wilder’s These Happy Golden Years or Elizabeth George Speare’s The Witch of Blackbird Pond. Really, any of these books could be featured in this post about first loves, but the one that came to me was Coolidge’s What Katy Did Next, the third of the What Katy Did series. I must have read these books in fourth and fifth grade and I loved Katie Carr, the protagonist. I saw myself in her. She had brown hair (not like all those blonde heroines), had spunk, and became pretty when you got to know her. It felt too self-centered to think of myself as pretty, but I was willing to accept that my personality made me attractive. And it was personality that made Katy, and the other heroines in this group of books, so important to me as a reader. 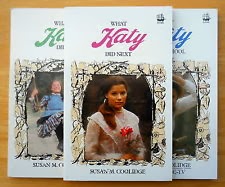 I reread this novel in preparation for this post and found Katy as attractive as I remembered her. There is a little moralizing in the novel, moments when the author steps forward to tell her readers what lesson they might take away from a given moment. But the Katy books were written in the 1880s! Modern novelists avoid moralizing like the Roman fever, but as a young reader, I didn’t even notice these few sentences. Like Lt. Worthington, I was transfixed by Katy.
Email Post
Labels: Anne of Green Gables Ellen Jensen Abbott Laura Ingalls Wilder romance strong girls What Katy Did