This Writer's Beginning by Jody Casella

Today, on this date forty years ago, my father died. He was thirty four years old. I was seven. His death meant the end of a lot of things.

It was also a beginning.

I heard an interview with Alice Walker once. She was talking about her childhood and why she thought she became a writer. She said that the age of six or seven can be a turning point for some people. Before that age, you're at home, and whatever your situation might be--good or bad--it's the norm for you. You don't have anything to measure your experience against.

But at age six or seven, you venture out into the world. You go to school. You visit friends' houses. You notice how other families live. If it's very different from your own experience, you question yourself and your place in the world.

It can be kind of traumatic. If you're a reflective type of kid, you turn inward. You read a lot. You write. This is what happened to Alice Walker.

Hearing that interview struck me because of course I was thinking of myself, at age seven, losing my father. I was too young to process that loss. Most of what I remember from that time is blurry. Chaos. Confusion. Fear. Other emotions came later.

I hate to admit this, but another emotion I had was shame.

I didn't want people to know that my father had died. I didn't want to have to explain. I didn't really know him, which is a sad thing to me now. The loss I felt was more about the general loss of a parent and not the specific loss of my father, the person.

I coped the same way Alice Walker did. I escaped into books. I wrote stories--because that was a form of escape too. When people praised my stories, I wrote more.

I never wrote about my father.

My book Thin Space is a totally made up story about a boy who loses his twin brother in a car accident. He's heard about the Celtic belief in thin places, where the wall between our world and the world of the dead is thinner, and he becomes obsessed with the idea. If he can find a thin space, he can see his brother again.

He teams up with a girl who has her own reasons for wanting to find a thin place. She wants to see her father.

There's a passage in the book where the girl, Maddie, is telling the boy about how her father died when she was younger. She can't remember him.

"Do you think that's stupid?" [she asks the boy] "Wanting to see someone you didn't really know?"

"Not really. If I didn't have any pictures of him, I don't know if I'd remember anything. And sometimes  I think it's just the pictures I remember and not real memories...I have this one picture where he's helping me button up my coat. I can see his fingers on the buttons, you know, and his face bending toward me. He had this very pronounced Adam's apple and a pointed chin. But here's the thing--that's all in the picture. So do I really remember him or am I just imagining that I do?"

I wrote this bit of conversation and never thought anything of it. A few weeks ago, an aunt (my father's sister) called me. She mentioned this conversation in the novel and said it made her cry.

The other day I was doing a bit of decluttering and I found this picture. 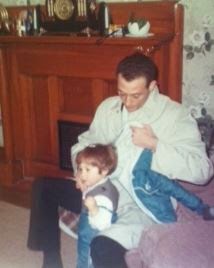 It turns out that I wrote about my father after all.