I’ve been thinking about the weather a lot these days. And it’s not just because schools are closed and it’s snowing while I write this. Yes, it’s been a tough winter in New Jersey, “But at least we don’t live in Boston,” as our school superintendent is fond of saying every time there’s a delayed opening or a school cancellation. During tonight’s global connect phone call to inform us schools are closed again tomorrow, he said the kids who shovel his driveway wanted to know what kind of benefit package he’s offering.


Hope the spring thaw happens before he quits his job in education to become a stand-up comic. Sounds crazy, but you never know. The weather can have a profound effect on people’s moods and actions. On some level, we both know and fear this. Why? Because the weather is something we can’t control. Not that we don’t try. We tune into 24-hour weather channels, download weather apps to our phones, and watch the evening news all in the hopes that knowing what’s coming will somehow give us an edge; take the wind out of Mother Nature’s sails. And sure, hearing the weather forecast can help. We can throw an umbrella in our tote bag, or reschedule a flight. But sometimes weather conditions are so intense, so extreme, that not even legendary meteorologist Jim Cantore can prepare us for the trouble headed our way.


That’s the premise behind my upcoming YA novel THE SUMMER AFTER YOU AND ME. Set at the Jersey Shore during the first summer after Superstorm Sandy, the book follows 16-year-old Lucy Giordano as she tries to rebuild her life in the barrier island town of Seaside Park in the aftermath of the devastating hurricane. She’s also attempting to forget “the big mistake” she made with her longtime crush, Connor, the part-time neighbor boy who spends summers “down the shore.” The pair share an intense connection on the morning of the storm, but afterwards Lucy is left reeling. In her heart, Luce knows a smart girl like herself shouldn’t have crossed the line with a player like Connor. But she couldn’t help it. Why? Blame it on the storm of the century, which certainly earned the title "Super."


Sandy was the largest Atlantic hurricane in history. It had sustained winds of 75 miles per hour, an eight-and-a-half foot storm surge, and winds spanning 1,100 miles across. It affected a total of 24 states with New Jersey and New York being among the hardest hit. Twelve people died in New Jersey, 2.7 million were left without power, 37,000 primary residences were destroyed or damaged, and 8.7 million cubic yards of debris were left in the storm’s wake.


I used to wonder why we gave human names to storms, but after living through Superstorm Sandy and experiencing her effects in both my hometown, where schools were closed for nine days, and witnessing the devastation in and around the shore town where we spend our summers, I now know why. Victims of that kind of senseless destruction need someone to blame. A storm of that magnitude certainly feels like a “someone,” and when I wrote this latest novel, I wanted Superstorm Sandy to feel like another character.


I also hoped to convey a picture of the real Jersey Shore that I know and love. One that I feel has been misrepresented by reality show transplants, and that sadly has been forever changed by Superstorm Sandy. 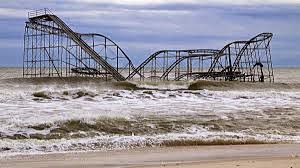