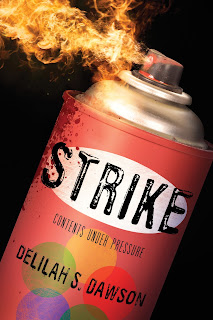 It's hard to write book 2 when book 1 is about a teen assassin taking on a hit list of ten people. What can you do-- give her a SECOND hit list? Like, "Oops, we just need you to take care of a few more things..."?

And that's why the sequel to HIT is called STRIKE and involves a lot of explosions.

When you're writing the first book in a new series, you're driven by the shiny newness of the idea. New world, new character, new plots to explore. It's freeing. You're excited and see the story with fresh eyes. Quite often, your skills have improved since your last book, and you're in love with the experiment, with the reckless thrill of seeing what will happen. The writing itself is an act of rebellion.

And then you sell that book as part of a series, and suddenly, you have to write something even better, something true to the first book that still surprises and delights readers. Something reasonable that makes logical sense. The first time I was asked to outline a series, I freaked out a little. What if the second book was boring? How could I outdo what I'd just done? How could I satisfy the readers while also dazzling them? When I look at the series I love, the second book is often my least favorite. So I analyzed why that could be and came up with a universal answer.

When a second book sucks, it's often because the author played it safe.

In HIT, an Atlanta teen named Patsy is tapped as an assassin by the bank that has taken over America. She's given a gun and a list of ten names. Either she taps these debtors as fellow assassins, collects the six-figure sums they owe, or kills them on the spot. If she refuses or fails, her mom takes a bullet... and so does she. If she succeeds, her mom's medical debt will be forgiven, and Patsy can just go back to normal.

But 'teen assassin goes back to normal' doesn't make much of a sequel, does it?

Luckily, HIT ends in a place that doesn't allow for normal. Maybe there was a way to play it safe, but I purposefully chose the most insane twist every time something went wrong in STRIKE. The first book might have a lot of blood, but the second book, as the cover suggests, has a lot of explosions. I've always been leery of book series in which the first book exposes the government as evil and the second book involves the hero plotting to take down the government. Boring! It takes more than two plucky teens and a couple of bullets to take down something as sprawling and nebulous as a government. And that meant that I had to find something else for Patsy to do as her country fell down around her.

If someone were to ask me my best advice for writing a second book, I wouldn't hesitate. "Give it a spark" isn't quite enough, but "Blow everything up" comes closer. Don't be afraid to make the hard choices, to let the characters get out of hand and do surprising things. Don't play it safe.

Books are a lot more fun when you don't play it safe. 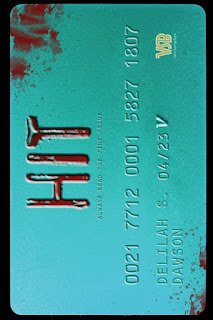 Delilah S. Dawson is the author of HIT, SERVANTS OF THE STORM, the Blud series,
and the upcoming STRIKE and WAKE OF VULTURES.
You can see all her books at www.whimsydark.com
or read an excerpt of HIT at www.hitbookseries.com.
Email Post