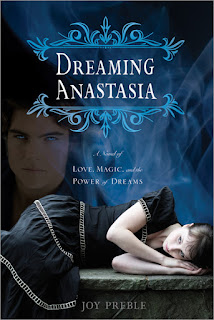 My very first novel, which readers know as DREAMING ANASTASIA, began its life titled SPARK. That was actually the name on the contract and the name when the deal was announced in Publisher’s Marketplace. Here’s that original 2007 deal announcement:

Joy Preble's SPARK, a contemporary fantasy of Anastasia Romanov's disappearance, in which a teen ballerina's line of descent becomes her destiny as she joins forces with a mysterious boy, battles those who betrayed the royal family, and rescues the princess from a legendary Russian witch, to Lyron Bennett at Jabberwocky, in a nice deal, by Michelle Andelman at Andrea Brown Literary Agency (World).

I took the title from the magic sparks that lit up Anne and Ethan’s hands, the spark that signified both their connection and that she was ‘the one’ Ethan had been searching for since 1918, the one who could save Anastasia from the hut of the legendary Russian fairy tale witch Baba Yaga.

So many things have changed since that original ‘spark’, including many things from that original deal announcement. The title became DREAMING ANASTASIA, for one. My editor, Lyron Bennett, left before the book was published in 2009 and was replaced by Dan Ehrenhaft, who was there when the book released and is now my editor at Soho Press. The book was published through Sourcebooks’ Jabberwocky imprint (which is their children’s/MG imprint) because the wouldn’t even launch their young adult line, Fire, until spring of 2010. So DREAMING ANASTASIA (originally Spark) was their first YA title even before their was a YA imprint! And my agent at the time, the delightful Michelle Andelman, left the following year to try a different job and I was matched up with my current amazing agent, the brilliant Jennifer Rofe. Spark/Anastasia, did well enough that it became a trilogy, all three of which are still in print!

That’s the thing about those sparks in publishing. You never know where they’re going to lead you. Spark was the start of everything that came after: Six books on shelves and a seventh (and hopefully more after that) coming next year. A whole new world of fascinating writers and readers and bloggers and librarians. And a chance to tell the stories rattling in my head. Like Anne in the book, I found out that I had a different destiny than the one I was living.

What are your sparks?