The great Newbery medalist Sid Fleishman used to say that you can’t write a book based on just one idea. He said that an idea is like a stick: You can use it to poke holes in the ground or play fetch with your dog, but otherwise it’s not of much use. You need two ideas—two sticks—and when you rub them together, you get a spark. Out of that spark grows a fire, which is the story.

So when I get stuck, I sometimes throw together two things that wouldn’t normally be in the same place at the same time and let them rub against each other. I put two unrelated characters in a room and let them talk. I introduce a plot point at an awkward point in the story. I turn a castle into a house and see what difference that change makes in its inhabitants; a boy into a centaur, with all the difficulties of having your best friend have hooves; medieval Scandinavia into ancient Pompeii.

If I’m lucky, when the new element rubs against what I’ve already imagined and written, sparks fly. Sometimes they fizzle out without lighting a fire, but that’s okay. I don’t have to use what I write—I’m just playing and exploring.

Give it a try sometime! Your spark might catch and make a cozy campfire—or maybe a full-on blaze that changes everything. 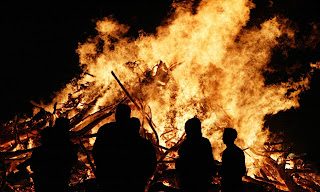