"It's hot!" And other school dress code problems (by Patty Blount)

Sorry, all! Forgot to hit the switch on this post that was supposed to go live yesterday.

All this month, we Outsiders are blogging about summer ending, summer heat, and summer sunsets. As I write this, back-to-school commercials advertising fall fashions are playing on my TV.

Is it me, or is time moving at warp speed?

Here on Long Island, school begins in September, but for many areas of the country, school has already begun  -- and so have the annual dress code wars. It's still hot and many schools aren't air conditioned so all these fall fashions aren't appropriate yet.

Niether is asking girls to cover up.

I am the mother of sons -- I don't have a daughter to shop with, so I'm not "up" on the latest styles and trends for girls. I can tell you this, though... I used to be astounded by what I saw some of the girls wearing to school when I dropped off my boys. Shorts so short, I could see underwear. Tops cut so low, I could see bra. Mini skirts. Belly buttons, you name it.

And then I wrote a book called Some Boys that changed my whole perspective.

While researching this story, I kept coming across something called rape culture. At the time, I thought that was just some term made up by the media but now I know it's a very real and dangerous thing that provides excuses for poor behavior by shifting blame and responsibility for that bad behavior to victims. 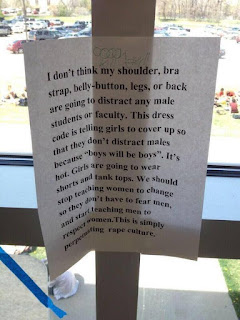 It is not your fault. The only person at fault here is the boy who chooses to disrespect you.

And here's the flip side of my argument. I'm the mother of two sons. I do not make excuses for their bad choices and bad behavior. I don't shrug and give you one of those insipid little smiles and say, "Oh, you know...boys will be boys!"

And a poor one at that because there should be NO excuse for harassment, for assault, or for rape.

"I couldn't help myself! My penis saw her exposed knee caps and just had to penetrate her! I'm just a poor boy who cannot control his own body! It's not my fault. It's hers. If she'd only covered up those knees, I wouldn't have raped her."

As the mother of sons, I am disgusted that we are to believe our boys are incapable of being more than just a walking sex organ. That they cannot control their bodies or urges. That they cannot understand a girl's body is not their playground. This is insulting and degrading to the boys I'm trying to raise. You're telling my boys that there is no hope for them -- it's just a matter of time before they rape someone.

I get it... I do. Schools want a distraction-free place to learn. Children of both sexes should dress tastefully and respectfully. Okay. Fine. Enforce dress codes but don't degrade children while you do it. Calling them a distraction does both sexes a disservice. Maybe it's time we dumped sexist dress codes and instead, enforced sexual assault policies that insist on respect for everyone.

If you're a parent, what are you doing to teach your son how to treat the girls in his school? Do you make excuses or do you hold him accountable? Bra snapping, groping, dirty jokes -- none of these are respectful.

I believe no girl should ever be shamed for what she's wearing, as this girl was for wearing this outfit. 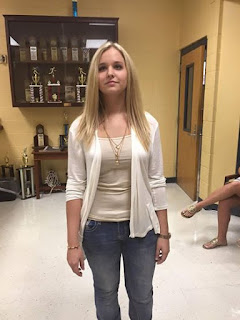 Instead of enforcing sexist dress codes, how else do you think we can address rape culture in our school system?

Email ThisBlogThis!Share to TwitterShare to FacebookShare to Pinterest
Labels: back to school, distraction, dress code, rape culture, respect, Teens, ya