I know that the cliche is that time seems to speed up the older you get, but to me summer has always been subject to its own peculiar temporal rules. Despite the longer days, July and August seemed to zip right by, while September and October dragged along. I guess the cliche in place here is time flies when you're having fun. 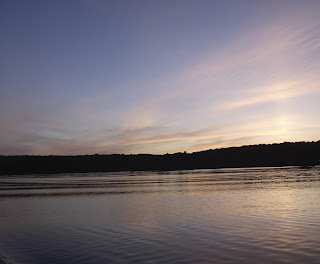 As a kid summers were a magical time, where I had almost unlimited freedom. I could read whatever books I felt like reading, play all day and was free to create whatever sort of things I wanted: stories, movies, plays and forts, among them. Summers were the time when you didn't have adults telling you what to do all the time. Note: I did still have parents in the summer, but they tended to be at work a lot of the time, and my sister and I were often left to our own devices.

But the cruel thing about summer is that it's over in the blink of an eye. Just when you are starting to get used to this new scheduleless schedule, something horrible happens, the calendar turns and suddenly it's September, and you must go back to school.

Summers have not gotten any longer now that I'm an adult, but I'm happy to report that life has gotten immeasurably better since being a grown-up means not having to go to school. (I guess that's not true if you're a teacher, but I'd be willing to wager money that the sort of people who become teachers, were also those strange, twisted individuals who looked forward to the start of a new school year.) It probably helps that I carved out a niche for myself that means it's sort of like summer year round for me.

Being a writer means creating things is a sort of job for me. I say sort of a job because being a writer doesn't exactly bring in the big bucks, but thankfully I have some assorted side ventures that pay the bills, and since these side ventures, like my writing, are a form of self employment, I don't have to deal with people telling me what to do and can create my own schedule each and every day. This reminds me a lot of the summers I remember as a kid, with one notable exception. When September rolls around, the only change is that the weather gets a little cooler, well that and I do hear the school bus stopping to pick up those poor kids at the bus stop every morning.

Kids, if you too are dreading the start of the school year in the fall, rest assured that as an adult it is entirely possible to arrange your life in such a way that it can be like summer year-round. It might take you a little while and some hard work to get to this point, but you've survived those seemingly interminable school years, so I know that you can make it through this as well.

So, while it doesn't seem possible that we're already past the midway point of August, summer's fleeting nature is not anywhere near as depressing as it was in my youth, but I'm still going to make the most of it while it's here.
Posted by Alissa Grosso at 8:54 PM